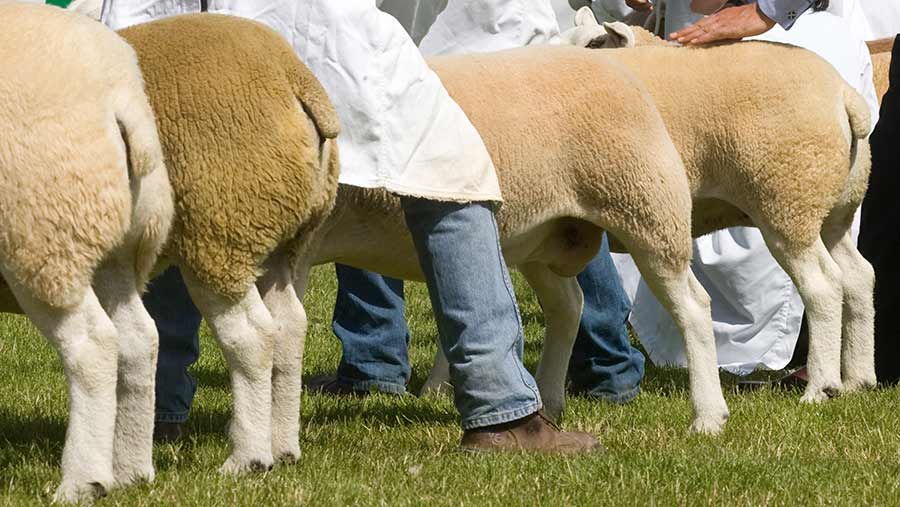 Improving the genetics of the UK sheep flock remains one of the biggest areas of untapped potential for the country’s sheep farmers, according to a breeding specialist.

Instead he said producers were still being led by the show ring when it came to deciding which traits they should be selecting for.

See also: Farmers told to ditch livestock showing if they want to survive

Speaking at the BSAS annual conference at the University of Chester (6 April), Mr Boon said the potential for UK sheep genetics was “absolutely massive”.

“We are still only recording 25% of terminal sires in the UK, while only 10% of producers are actively using Estimated Breeding Values across the breeds,” he said.

The achievements made in sheep genetics over the past 25 years through the use of group breeding and sire reference schemes, and the introduction of technology such as ultrasound should not be underestimated.

[Britain’s most-expensive ram] was valued for its perfectly-shaped head and legs, tight skin and top-quality fleece – none of the traits which have any influence on how it tastes Samuel Boon, AHDB breeding services manager

But the high running costs of groups, coupled with some farmers’ reluctance to record data properly and a focus on how sheep perform in the show ring meant that producers were not making the genetic gains they potentially could, Mr Boon told delegates.

“History shows that it’s not always the best genetics that has the most success,” he said. “It’s the ones that market the most effectively which dictate breeding objectives.”

“It was valued for its perfectly-shaped head and legs, tight skin and top-quality fleece – none of the traits which have any influence on how it tastes.

“It may have produced more than £1m-worth of offspring, but in reality it probably did more than £1m of damage to the sheep industry.”

Issues with recording data – particularly on hill farms – were also an issue for genetic improvements in the sector, Mr Boon added.

“It isn’t a problem with the systems and technology we have, it’s because we haven’t seen a change in the market. There isn’t the demand for recorded rams when people buy hill breeds like there is when people buy Charollais or other breeds.”

The challenge for the industry in future was to build the momentum of recording and sharing data, and utilise new technologies such as CT scanning to identify traits that could improve genetic gains.

“In future we will have commercial progeny tests which will look for the relationship between pedigree and commercially derived phenotypes,” he said.

“Signet’s first combined breed analysis for sheep in the UK will also enable a degree of breed comparison in the future and generate EBVs for crossbred lambs.

“We have over 700 performance-recording flocks, but we need people to engage,” he added.

“We need to get more people to collect data, look at it and understand how that can use it to influence their breeding decisions.”