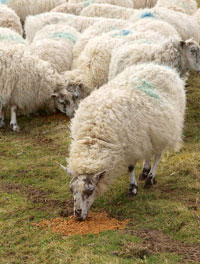 The future needs of both the pedigree and commercial sheep sectors came under the spotlight at last weekend’s Sheep Breeders Round Table, Warwick. Jonathan Long reports


Pedigree breeders were given a stark warning to change their ways or lose their customers by vet Ian McDougal at the event.

It was no longer acceptable to produce rams which were only capable of serving 40 or so ewes each season and had to be culled after just one or two years’ working, he told breeders at the event. “This is uneconomic for commercial sheep farmers and unless breeders listen to their customers they won’t have a business in future.

“Rams working in commercial flocks should be capable of serving 150 ewes a year and be able to work for at least four seasons. This drastically reduces the ram cost for every lamb born and should allow commercial buyers to invest in better rams and reward the genetic progress made by breeders.”

Many of the problems which limit ram performance are the result of over-feeding rams both as lambs and prior to sale, he claimed. “In the short-term rams fed excessive amounts of cereal based feeds prior to sale are likely to be infertile, usually for two to three months. On top of that those which are fertile are likely to be too unfit to serve a large number of ewes and this lack of fitness means they will melt away and become unsound.

“But it is the long-term effects of this chronic over-feeding which does most damage. The transient infertility in a ram’s first season usually clears up before the next year. However, these rams are not being bred to thrive on forage-based diets, so they are unable to survive in commercial situations.

“And the excess weight they carry from early in their life means they are often unfit in terms of limb development and they often have cartilage defects which are irreversible. This means they have to be culled early in their lives costing more for every lamb produced.”

When it comes to the change to a grass diet from a cereal-based ration rams are unable to thrive because the microbes in their rumen aren’t able to adjust quick enough. “It takes three weeks for the grass suited microbes to pre-dominate the rumen and this inability to extract the goodness from the grass means there are insufficient nutrients available to the ram and testicle mass is lost, rapidly reducing the ram’s ability to produce semen.”

And while overfeeding was a large part of the problem facing pedigree producers, their lack of customer focus extended into their sales practice too, warned Mr McDougal. “Selling rams by auction means few breeders know their customers well enough and so they don’t follow up on their sales. Every breeder should be contacting their customers each year to check how the previous year’s rams have performed.

“Also, selling at auction means you have little time to speak to customers to find out if the rams you have are what they want and help inform their ram choice. There’s little point spending a lot of money on performance recording if you don’t have time to explain the results to prospective customers.”

Commercial producers also had a lot to do if they were to maximise their income, Farmers Weekly Sheep Farmer of the Year 2008 Crosby Cleland said. “Too few farmers know what it costs them to produce 1kg of lamb and without knowing that figure you can’t move your business forward.

“Commercial producers must stop buying the biggest, heaviest sheep available and look at what is sustainable. A 100kg ewe is no more prolific than a 65kg ewe, but she needs far more feed to produce the same lambs as a 65kg ewe. Ewes should lamb unassisted and be capable of weaning at least their own weight in lambs. Rams, meanwhile, should grow rapidly at grass, produce a 17-21kg and be capable of mating 120 ewes a year.”