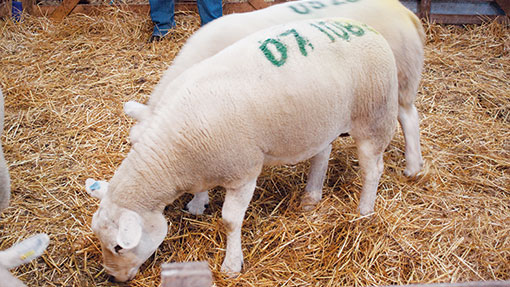 Ensuring the right levels of trace elements before tupping can improve productivity. Farmers Weekly reports on the latest research.

The benefits of the approach have resulted in improved fertility across conventionally bred ewes and has led to a virtual eradication of white muscle disease.

“I first read about the role of trace elements in embryo production in a report produced by Edinburgh University,” Mr Howard explains.

“This showed a direct correlation between blood levels of iodine, selenium and cobalt and the ability of donor ewes to produce higher numbers of mature embryos and for recipient ewes to hold, maintain and grow these.

“Embryo transfer is an important tool in accelerating our breeding objectives and multiplying up good bloodlines, so use of micro-nutrition in this way is something I’ve been keen to try for some years, he says.”

The 55-strong flock of pedigree ewes, based at Battersby, near Great Ayton, is supported by 25 Maedi Visna-accredited recipient ewes and every year five or so of the Texels are flushed.

“We’re looking to produce long, powerful, strong, and correct stock to progress the breed and our flock in particular, while giving us a good selection of stock for replacements and that we can sell on through the pedigree sales.

“Flushing and embryo transfer is a notoriously ‘hit and miss’ affair – no two years are the same even if you follow identical protocols – so using a scientific approach to improve flush rates and retention is something that is of great benefit to us.”

Mr Howard’s approach involves using a “controlled release” bolus given to all breeding ewes, including donors and recipients, four weeks before AI or tupping.

“The key to the technique working is to maintain levels of selenium, cobalt and iodine from the time of administration right through to when the ewes lamb, so I went looking for a means of doing this.

“Clearly the existing lick buckets were not going to be capable of providing this level of precision or uniformity across the flock.”

“On the flushing side, we immediately noticed a 20–25% improvement in embryos produced within a narrower range giving a much more consistent number produced across all the ewes.”
John Howard

Working with trace element specialists Agrimin, Mr Howard decided to use a bolus delivering 0.8mg of cobalt, 4.0mg of iodine and 0.4mg of selenium every day for the full 180-day period he was looking for.

Results have been both impressive and consistent, he says.

“On the flushing side, we immediately noticed a 20–25% improvement in embryos produced within a narrower range giving a much more consistent number produced across all the ewes.

“When these were implanted, we got much better hold rates. These can range between 25–95% but with the supplementation they were much steadier at about the 65–70% mark. We still got the highs, but the really low dips seem to be a thing of the past.

“We also noticed the usual incidences of white muscle disease – which is linked to selenium and vitamin E deficiency – had disappeared. This tells us animals were getting the right levels they need and we’ve never had to give injections for struggling animals since using the boluses.”

Administering the boluses couldn’t be easier with the special applicator, he says, and the process fits in easily with any number of routine management processes.

Ieuan Davies from Agrimin says: “Boluses can be given either pre-tupping or at scanning using a special applicator and are designed to lie in the reticulum where they undergo a process of ‘controlled erosion’ releasing nutrients in a sustained and measured manner which avoids the haphazard delivery of licks, drenches and the like.”

Mr Howard adds: “We give the boluses about the end of July and usually when the animals are being drenched. We have a large foot-bath that holds six to eight ewes and we simply treat them then as they’re in there for a couple of minutes – that’s all it takes.

And at just under £1 an animal treated, the cost benefit analysis of the approach is a “no brainer”, as Mr Howard puts it.

“We sold a lamb at Lanark for 5,000gns last year and who is to say that wasn’t from an embryo that was produced because of the trace element treatment.

“All you’ve got to get is one or two average embryos to set and hold that you wouldn’t have got otherwise and the boluses have paid for themselves umpteen times over.”

Three different studies carried out by the University of Glasgow’s School of Veterinary Medicine have confirmed the importance of sustaining adequate levels of key nutrients in the six months from pre-tupping to lambing.

The findings build on earlier work concluding it is impossible to ensure appropriate and individually uniform consumption of trace elements and vitamins by groups of sheep and cattle at grass from mineral mixtures, molassed liquids or high-density feed blocks.

In the first study, the overall lambing percentage of hill sheep was lifted from 100% in untreated ewes to 160% using trace element boluses – attributed mainly to balancing selenium levels.

In the second flock, lambing percentage was lifted nearly 30% using the boluses with a higher proportion of twins and less barren ewes in the treated animals.

In the third study, the number of ewes found to be empty was 50% fewer in ewes with the bolus compared with those without it.

The overall conclusion of the Glasgow University team was that the boluses significantly enhance the reproductive performance of the ewes.