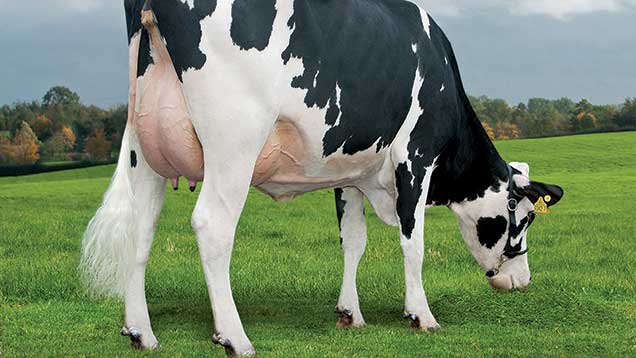 Formerly in number two position, Prehen Omen’s transmission of milk solids together with a good volume of milk gives him the edge with a PLI of £605.

Omen was bred in County Londonderry by father and son, Robbie and Stuart Smith, whose herd boasts many of the UK’s top genetic merit cows including several of the acclaimed Froukje family from which this bull was bred.

See also: A guide to the changes made to the dairy bull proofs this summer

Prehen Omen pushed the Danish-bred former number one sire, VH Tirsvad Goldwyn Grafit, into second place with a PLI of £587. However, he is the highest kg fat transmitter with a predicted transmitting ability (PTA) fat of 29.6kg.

Joining Grafit in joint second is the Planet/Ramos cross, Kings-Ransom Erdman, who is the equal highest lifespan improver of all top 100 bulls. Transmitting excellent daughter fertility (11.4), Erdman also has a good maintenance index of -14, indicating reduced feed costs for maintenance as his daughters are smaller than average.

Maintaining his fourth position with a PLI of £563 is Hammer-Creek O Man Kody, the third Oman/Goldwyn cross (together with Omen and Grafit). Kody transmits solid fitness with high milk yields (565kg).

Another non-mover and ranking in fifth position with a PLI of £558 is Ladys-Manor RD Grafeeti, with a high type merit of 3.42.

“This index run as seen nearly double the number of proven bulls with a PLI of over £500, which highlights the rapid progress being made in the Holstein breed,” says Marco Winters, DairyCo’s head of genetics.

“This progress has been largely due to the introduction of genomic young sires.

He says that the generation interval for the dairy cow has been slashed, with no less than eight of the top 10 PLI sires being unavailable at the last proof run in August.

Topping the genomics list is the new Canadian-bred Sandy-Valley-I Penmanship, whose sire is also a young genomic bull – just like the sires of nine of the top 10 bulls.

Penmanship smashes the £700 PLI barrier at £745 and he is sired by Mr Lookout P Enforcer (Facebook x Shottle) and out of a Numero Uno dam.

His maternal grandsire, Numero Uno himself, had only gained a daughter proof for the first time this month, which Mr Winters says further highlights how quickly genetic progress can be made.

Second-ranking PES009 Boardshop (Enforcer x Bookem) comes close to the number one sire in most respects, and weighs in with a PLI of £682.

“These bulls represent elite breeding we could not have dreamed of on this scale a few years ago, and I’d urge milk producers to consider using a cross-section of good young sires for their herds,” he says.

Full details of the new £PLI can be found on the DairyCo Breeding+ website.

As the breeding season approaches for grazing-based, spring-calving herds, producers are advised to use the new Spring Calving Index (£SCI) to help with their sire selection.

The index is specifically for herds which block calve in spring, place a heavy reliance on grazed grass and are targeting annual average production of around 4,500 litres,” explains Mr Winters.

With little change in ranking since the inaugural run, he says the list particularly helps breeders who are considering cross-breeding their herds.