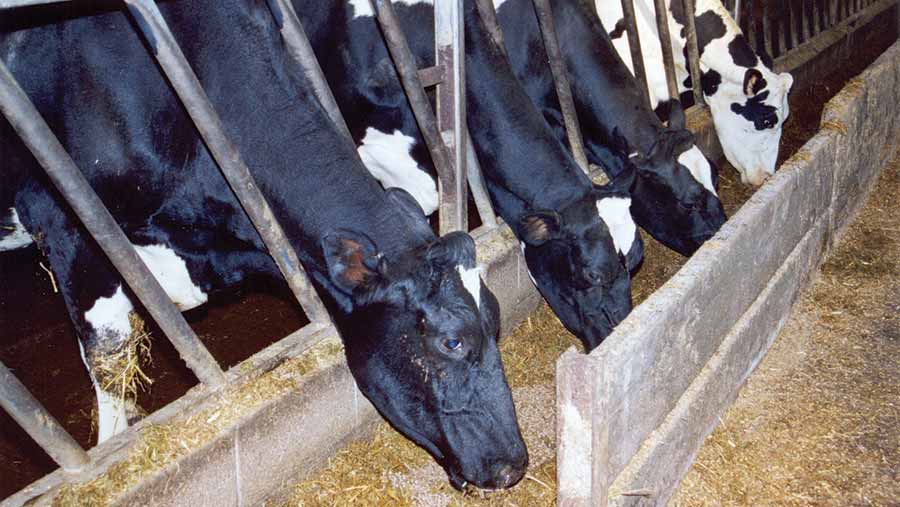 NO REUSE - submitted pic for use with Farmers Weekly, Livestock, 27 November

Cow stoppers can be a useful method of achieving a pregnancy in dairy cows which fail to conceive.

In this article Gemma Dobson of the Paragon Veterinary Group in Cumbria answers Farmers Weekly’s questions on how they work.

She explains how a cow stopper – the term used to describe an embryo implanted into a cow which has failed to conceive naturally – can help improve a farm’s fertility levels.

Plus, she considers how to assess whether using the technique is suitable for your farm and how much they can cost.

And we visit Richard Baynes’ dairy farm near Hexham, Northumberland to see how he has been putting procedure to good use in his 120-cow herd.

What is a cow stopper?

A cow stopper is a term to describe an embryo implanted into a cow which has failed to conceive naturally. It is inserted into the cow’s uterus, using the standard technique for embryo transfer.

It is, effectively, a “seven-day” pregnancy.

The insertion of a cow stopper is a non-surgical procedure, but it must be performed by a vet, or other trained person. An epidural anaesthetic is administered, to relax the muscles and minimise any discomfort.

Cow stoppers for dairy cows are usually easy-calving beef breed embryos, to allow the clear identification of any resulting calf.

The producer can then be certain whether the cow conceived via other means, or the successful pregnancy was due to the cow stopper.

When should they be used?

On some farms, cow stoppers are reserved for repeat breeder females, which are highly valued for their milk yield and/or quality and the owner wishes to retain them in the herd, for at least one subsequent milking cycle.

However, the technique can be used for any dairy cow.

In practical terms, a cow stopper is inserted seven days after a standing heat has been observed.

It is advisable to inseminate the animal in conjunction with a cow stopper, to give the best possible chance of pregnancy.

A budget of £70-£100 a cow is standard and will include the price of the embryo.

However, the fee may vary, depending on individual veterinary practice charges and how many cows are being treated.

Are they suitable for me?

Producers are often surprised at how little the technique will cost.

The price should be compared with the expense of keeping a barren cow, which can amount to as much as £5/day.

Cow stoppers will usually offer a 30-50% improvement in pregnancy rates, for repeat breeders.

For the past six years, Richard Baynes has been using cow stoppers intermittently.

He and his family milk a 120-cow herd, made up of Ayrshires and Dairy Shorthorns near Hexham, Northumberland, in equal numbers.

About 50% of annual production is sold direct to local retailers, under the Northumbrian Pedigree Milk and Cream brand name.

Mr Baynes says the procedure is not used extensively across his herd, with cow stoppers only used on no more than three of four animals a year.

“They (cow stoppers) are reserved for young cows, or for individuals which have performed particularly well in the past,” he says.

The general pattern of usage is for females to be artificially inseminated twice with dairy straws, followed up by a straw containing beef breed semen.

If this proves unsuccessful, the animal may be selected as a candidate for a cow stopper.

While the embryo is usually a beef breed, a Marleycote embryo is sometimes used.

Some of the best cows are flushed, to speed up genetic progress, and there are always a number of eggs in storage.

The average success rate is about 50%.

“This figure may not sound high, but it has to be weighed up against the losses that can be incurred through culling, due to infertility,” says Mr Baynes.

“In addition, every day that a cow is barren costs money and with today’s tight margins, the empty period must be kept to a minimum.”

The use of cow stoppers is linked to the herd management system, which makes use of robotic milking machines.

“A cow which fails to get in calf will go stale and will visit the robot less frequently; perhaps only being milked once a day,” he points out.

“As well as triggering a decline in yield, it will also increase the risk of her cell count rising.

“Robotic milking has brought benefits to the way the herd is run, but it does increase the pressure to get the cows back in calf as soon as possible.

“From my viewpoint, cow stoppers are just one of a number of tools in the toolbox, to help me to return a profit.

“They are certainly not intended to prop up herd fertility; if that was the case, then we really would have problems.

“It could be argued that cow stoppers actually increase fertility, because females which fail to conceive quickly are not given the opportunity to breed replacements.”