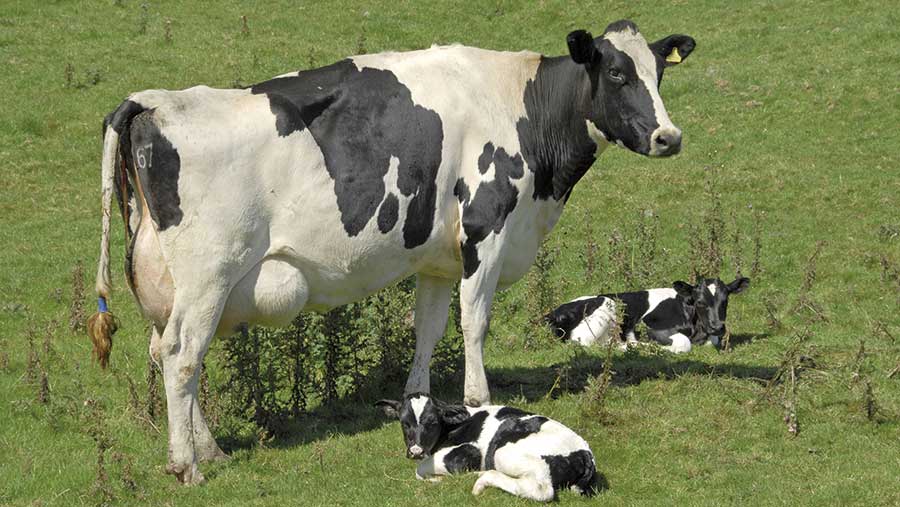 Twinning is an undesirable occurrence in dairy cattle, with the birth of more than one calf thought to be responsible for subsequent health issues in both cows and calves.

While producing twins can be something of a genetic lottery, the rate of twinning in Holstein cows has tripled over the past 25 years.

Research by Paul Fricke, dairy reproduction specialist at the University of Wisconsin, has shown that other environmental factors can influence the number of calves born per dam.

Problems associated with twins at calving

Milk yields have increased rapidly over recent years on the back of genetic improvements and better animal husbandry. However, as milk production has risen in the US, so has the incidence of twinning.

According to research carried out by Mr Fricke over the past 15 years, higher feed intakes – due to increased milk production – and the effect this has on the hormone progesterone is one of the reasons for this.

“Progesterone levels can be influenced by high feed intake – it increases blood flow through the liver and subsequently reduces the amount of progesterone in the blood.”

This reduction in progesterone is proven to increase the likelihood of double ovulation and the conception of dizygotic (non-identical) twins.

Therefore, the higher the feed intake, the more likely a cow is to produce twins – explaining the noticeable increase of twinning in high-yielding Holsteins.

“The level of milk production in the 14 days immediately before a natural oestrus is positively associated with the incidence of double ovulation in Holstein cows,” explains Mr Fricke.

“When cows reach 40 litres of milk production, there is about a 25% occurrence of double ovulation. At 50 litres, this increases to a 50% occurrence.”

The solution is not simple, and while reducing feed intake could obviously minimise the likelihood of double ovulation, this would also negatively impact production and profits.

“Twinning will likely continue to increase with milk production over time, so strategies to effectively manage twinning need to be identified and implemented.”

How to avoid twinning

This can be done by using a double ovsynch protocol, which effectively pre-synchronises cows to maximise progesterone during growth of the egg follicle.

To test the theory, Mr Fricke and his colleagues carried out a study that saw Holstein cows randomly assigned to two pre-synchronisation groups: high or low progesterone.

Cows in the high progesterone group were put through a double ovsynch protocol and were injected with a higher level of progesterone at each stage, compared to the cows in the low group.

Cows in the low progesterone group had more double ovulations (23%) compared to the high group at 12%.

“This led us to the conclusion that hormonal manipulation may be the best strategy to decrease twinning in dairy cows.”