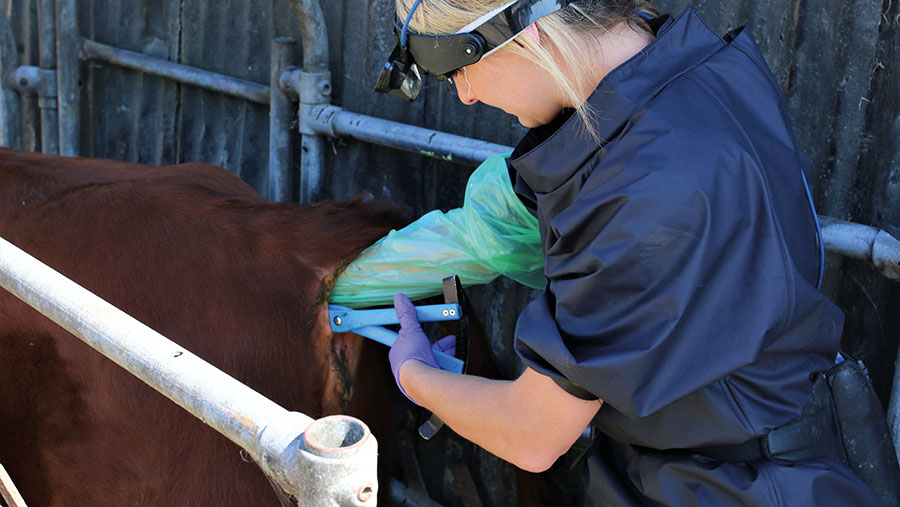 A heifer breeding soundness examination (HBSE) should be a key part of pre-breeding preparation, alongside bull examinations.

This should incorporate objective information that has been accurately calculated or measured, including age, weight and pelvic area values.

Alice Miller, from Friars Moor Livestock Health, in Dorset, talks through what is involved with pelvic scoring and why it is a valuable selection tool for beef herds to undertake.

What is pelvic scoring?

Pelvic scoring is used to help identify any heifer with a small or abnormally shaped pelvis. The score is calculated by taking internal measurements of the height and width of the pelvis using a Rice pelvimeter.

Vets carefully introduce the pelvimeter into the rectum with a gloved, lubricated arm and guide the rounded ends of the pelvimeter arms to the skeletal landmarks for measurement (see photo above).

The internal height is measured by depressing the levers, so the ends of the grooved arm sit between the symphysis pubis and the sacral vertebrae (see below).

The height measurement is read off the external (cm) scale and recorded. 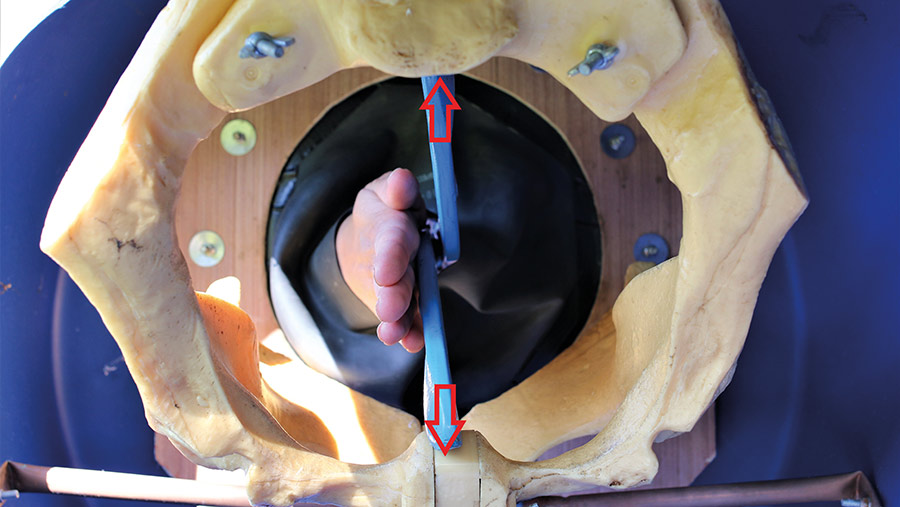 The internal width is then taken by rotating the pelvimeter horizontally.

The measurement is taken from the widest point of the pelvis, at the level of the paos tubercles (see below). 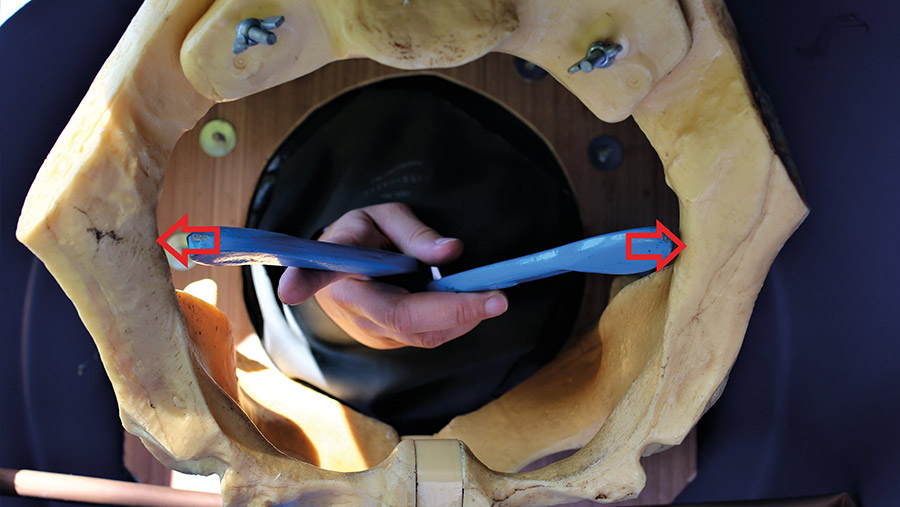 How is the score calculated and what do the values mean?

The pelvic area (sq cm) is calculated by multiplying the recorded height and width.

Typically, a value smaller than 130sq cm may not be suitable. However, where a heifer is being examined before the service period, the age and weight should be recorded on the same day as the pelvic scoring and considered alongside the calculation.

Using  “LeFever’s (1997) calf birthweight ration conversion chart system” (below), look up the age and weight of the heifer to give a conversion factor.

The pelvic area should be divided by this number to give an estimated value of the body weight (kg) of a calf that the heifer should be able to deliver without difficulty.

Where this value is unrealistically small, delivery of a normal-sized calf is likely to prove difficult and the heifer should not be kept to avoid this situation.

Why should you score?

Using pelvic scoring as part of the HBSE will help reduce the risk of difficult births (dystocia) and improve the chance of minimal intervention at calving.

Where the risk of dystocia is reduced, and a slow and traumatic delivery can be avoided, the chance of viability for both the dam and her calf is increased.

What other measurements are required?

Pelvic scoring should be used alongside reproductive tract scoring (RTS).

A vet carries out a manual examination of the heifer’s reproductive tract via the rectum to assess whether the heifer has hit puberty.

By recording the size and tone of the uterus, along with measuring the length, width and height of the ovaries and noting the presence and size of ovarian structures (see “Anderson’s (1991) reproductive tract score system”).

The heifer is given a score of 1-5, where 1-3 indicates she has not reached puberty and 4-5 shows she has.

The method of assessment has been modified to increase the accuracy and ease of obtaining these measurements by using an ultrasound scanner.

How do should the results be used to inform breeding decisions?

A heifer with a small or abnormally shaped pelvis should not be bred from.

When RTS is combined with pelvic scoring, it is easier to predict the chance of pregnancy failure and poor cyclicity.

It is important to interpret pelvic scores alongside reproductive tract measurements to avoid breeding from potentially unproductive heifers.

Beef farmers should still retain heifers from their best, most efficient cows, as well as keeping those with good conformation, a suitably sized external frame, and docile nature.

Most practices charge their routine hourly rate for HBSE, but others include it in a synchronisation breeding package, charging per animal.

While it requires a vet visit and can be more time-consuming than farmer selection alone, it is a more accurate way of predicting dystocia and performance.

Therefore, it has a significant value in reducing mortality and labour costs, and lowering the risk of stressful emergency veterinary intervention.