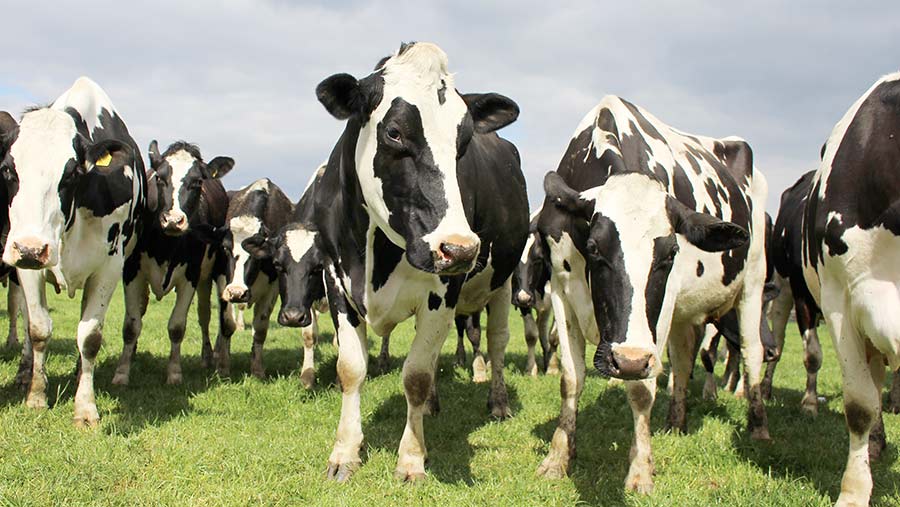 The drive to create a dairy system that can cope with fluctuations in the milk price, improve profitability and provide a better work-life balance has seen a Yorkshire farm transition to autumn block calving and at the same time improve grass use.

At the time the farm was milking 100 cows all year round through robots, and yielding 11,000 litres from more than 3t a cow of concentrates.

However, after only two years of operating the robots the farm hit financial difficulty and it was decided another route was needed if they were to survive in dairying.

Reason for the transition

Robots didn’t work at Castiles Farm because the grazing fields are across a road from the sheds.

This meant cows were housed all year and fed high amounts of concentrates.

The Nicholsons also wanted to expand their herd to 200, but when they did the sums, the cost of an extra two robots plus the service contract was going to set them back an additional 2ppl for the next 25 years.

See also: How to budget for the switch to autumn calving

Sean knew that if they were to make the farm more resilient to price volatility, they had to reduce costs and make more from their 68ha grazing platform.

Sourcing labour had also been an issue and they were relying heavily on foreign staff. Although Sean says there was nothing wrong with their work, they weren’t invested in the farm.

The decision was made to sell the robots, which funded a new parlour.

Since changing to a grass-based, autumn block calving system their cost of production has dropped by 10ppl.

Sean says: “Although with block calving you have busy times, there’s six months of the year when things are a lot easier.”

Sean estimates it will take him about seven years in total – meaning another two years to go – to transition to a tight, 12-week calving block from September to November.

He has moved away from Holsteins in favour of NZ Holstein x Friesian genetics.

The reason for the gradual transition, rather than buying in stock already calving in a block, is to protect the health status of the high-health herd and to avoid financial strain. The herd is free from BVD, IBR and leptospirosis.

Currently the 200-head New Zealand Holstein x Friesian herd is calving between September and April. The six-week calving rate last year (including heifers) was 34% and this year it is predicted to be 71%.

Everything is served to black and white for the first 1.5 months and then the remainder to beef, so the most fertile cows are breeding replacements. 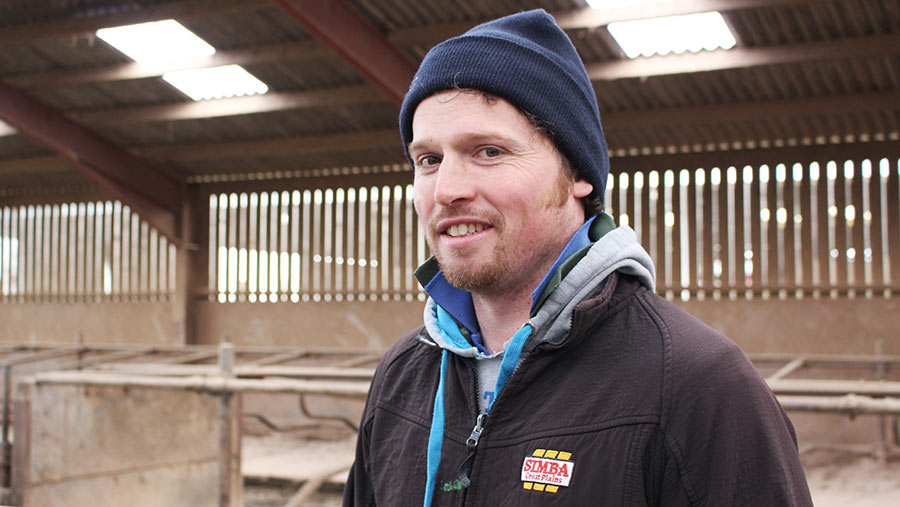 Last year they had 48 heifers born and this year they have 115 heifers calving. Sexed semen hasn’t been used because they believe the conception rates are lower.

Any cows not seen in heat but eligible to be served (dictated by days in milk) are given a prostaglandin injection to get them cycling and then served.

Bull and beef calves are sold at two weeks old to make space in the calf rearing sheds.

In the first few years when establishing the block, the farm let animals slip that came into heat during the summer so they could then be served in November.

As time has progressed, they have also sold in-calf cows that have fallen too far out of the block. Good pre-mating management and heat detection have been key to establishing and tightening the block.

Block calving means the focus is on specific areas at certain times of the year. These include:

November-January Breeding – heat detection and serving cows. Currently some cows are still being served up to April. Cows not in calf are grazed as a separate group at turnout in February.

Cows are housed three weeks prior to serving in November. All cows calve outside until November (weather permitting). Anything calving later is calved inside.

During the breeding period, which runs from November, all cows are housed. Kamars and tail paints are used to detect animals in heat.

Cows are also walked several times a day to detect any seen bulling. Record-keeping is vital to know which cows are in heat and when they were served.

During the transition period cows are fed wholecrop, silage and dry cow rolls so when they calve down intakes are maximised, Mr Spilman explains.

“The transition period is key to getting cows back in calf quickly,” he says. “The idea is to try and maximise intakes when they calve, which helps avoid issues with milk fever. Using an easy calving bull is also key to avoiding post-calving infections.”

Mr Spilman says heifer calf management is also important, ensuring they are big enough to be served at 14-15 months to calve down at 24 months.

The Nicholsons are also looking at deferred grazing for the dry cows to save money. This will involve strip grazing deferred grass which hasn’t been grazed for 6-7 weeks and grazing down to covers of 1,700kg of dm/ha.

Building space to rear extra heifer calves hasn’t been an issue, and nor has extra slurry storage capacity. However, these are things farmers should consider when looking to switch to block calving.

Setting up the grazing infrastructure

Grazing has been central to managing the autumn block herd. The decision was taken to set up rotational paddock grazing across a 68ha grazing platform. 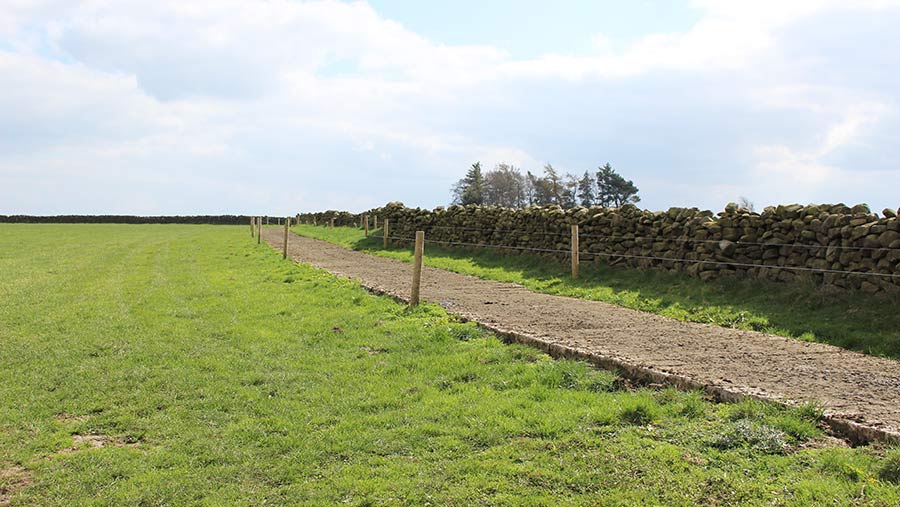 “Tracks are vital to extend grazing at the shoulders of the season and to prevent damage to the pasture by the cows,” says Sean.

Cows graze 1ha paddocks for 12 hours and are allocated 18kg of DM a day each.

When they are housed some of this allocation comes from grass silage and the rest at peak yield from a flat rate 8kg of a 13.5ME and 18% protein cake fed in the parlour. This drops to 5kg as yields drop off.

Cows are turned out in February and housed in late October.

The key is to graze grass when it is at the three-leaf stage, which means going into covers of 2,600kg DM/ha. Every extra grazing rotation is worth an extra 1.3-1.5t DM/ha.

The idea is to still have quality grass into the autumn at calving, by tightly managing the rotations.

The last rotation begins in late September/October and is slightly longer, allowing grass to recover by February. During the last rotation covers are closed at 2,200kg DM/ha.

Grass is measured every Thursday by using a plate meter. At least two cuts of silage are also made from the 68ha grazing platform.

The Nicholsons have invested in their own forage wagon so they can cut at the optimum time.

Some reseeding has taken place, but the grass is mostly a late perennial mixture which is cold-hardy and produces high amounts of dry matter. There is also some clover in the mix.

Mains water and electricity are being installed to the fields, with the plan to ring fence each field with wire to stop the cows pushing walls over.

Although most breeding focus has been on getting cows in calf, once the 12-week block is established focus will then be on refining the genetics.

Sean says: “We are breeding a resilient, fertile New Zealand Holstein x Friesian cow. The aim is for a body weight of 550-600kg to ease the pressure on grazing. We will focus on milk quality and other attributes once we’ve met our goal.”