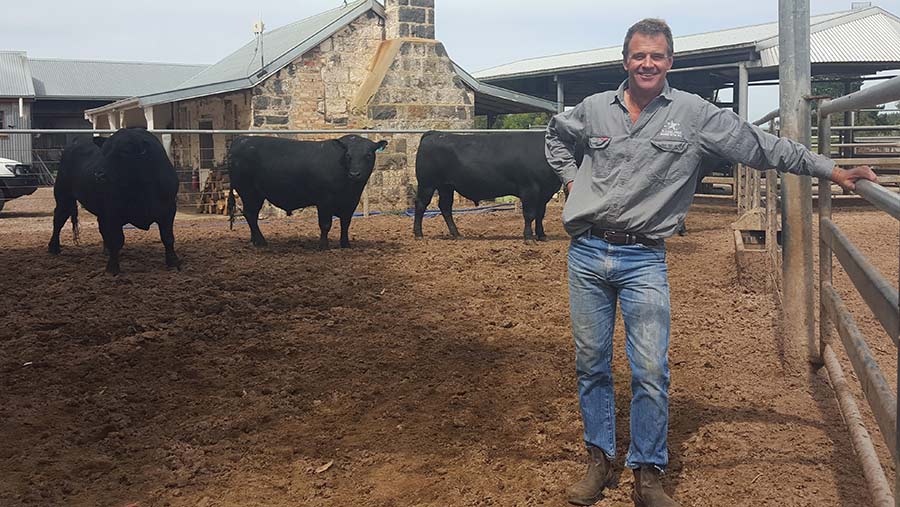 It is harder for breeders to record performance in the UK because of the small scale of beef enterprises and the unfit beef-grading system.

That was the message from Tom Gubbins, director of seedstock and breeding data business, Te Mania Angus, based in New South Wales, Australia.

Mr Gubbins runs more than 2,000 females and bulls across 2,700ha (6,669 acres). As well as hosting an annual bull sale, he leases bulls to 45 herds as part of a progeny test programme.

At Te Mania, animals are analysed in large cohorts. Cow-and-calf pairs run together in groups of 250 until weaning, when progeny will be sexed and split into mobs of 140 males and 800 females.

The animals are tagged for electronic identification (EID) and individually performance-recorded for 25 traits of economic importance, including growth rate, fertility, foot structure and eye muscle area.

See also: How cattle breeders are adapting to survive volatility

“The variation is more likely to be genetic in large groups of animals that are in the same environment,” says Mr Gubbins.

He adds: “If we check the data on all the individuals in large genetic cohorts, we can work out which animals are performing better in those groups genotypically rather than phenotypically, and then choose those animals to be the next generation that goes into our nucleus herd.”

Mr Gubbins says in smaller herds, size is a disadvantage because farmers must run smaller mobs of animals that aren’t necessarily treated the same.

“It is harder to tell if the variation is genetic or not. But it is still achieved and it’s only a case of slowing it down. The advantage is you can record more traits [in smaller mobs].”

However, he admits running larger groups can be a challenge.

At Te Mania, animals stay in groups after weaning until 400 days, when they are scanned for eye muscle area, fat depth and marbling.

“If you have animals not performing well, in most commercial situations you would draft them out, but for us the lesser-performing animals are just as important as the ones that are doing well.

“They could be related to particular genetic lines in the herd and it’s really important we identify them.”

Genetic verification is improved further using performance data fed back by commercial herds feeding when the animals are killed.

This information is sent from Te Mania’s cloud-based system to the University of New England, where it is analysed and turned into estimated breeding values.

This is essential, given their focus is to produce long-fed, high-marbling carcasses for sale to some of the best restaurants in Asia.

“The flaw is your beef-grading system is not giving you clear information about which animals are marbling and yielding better, so it’s very difficult in a genotypic environment to start breeding those important carcass traits.”

Given the growing significance of provenance, traceability is also becoming increasingly important to demonstrate environmental credentials, he says.

“Provenance is a big thing in Australia. European and US shareholders that invest in big corporate farms are now demanding the companies they invest in care for the environment.”

This, he says, involves looking at net feed intake, which is highly correlated to methane yield in livestock.

At first glance, when you look at the amount of GHG that is emitted from animals and compare it with our global problem, it looks bad, but many things are not taken into consideration, he says.

“The carbon cycle of a cow is about 12 years, whereas the cycle of the carbon that comes from the exhaust of a car is 300m years.”

He also suggests the industry shouldn’t become polarised in the grass versus concentrates debate.

“To say that grass is good and feeding animals concentrates is bad is not necessarily the end of the story. Ruminants are fantastic at converting food that is not fit for human consumption into a high-quality protein that humans can eat safely.

“I think we’re going to learn a lot about the role of the ruminants in feeding the human population in the next 50 years.”

Breeding gains in your own herd

Despite these future uncertainties, Mr Gubbins says there is still a lot that can be done inside the farmgate to improve profitability through genetic gains.

“Firstly, you need to discover what drives the economics of the market you are targeting and how to fit those animals into the environment they live in.

“Then collect the data and start modifying those animals so you can capitalise on the benefits and suppress the negatives to boost the profitability of your business.”

Ensuring the environment is right is key, too, which isn’t always the case in the UK, says Mr Gubbins.

“You don’t run beef cattle where you can milk dairy cows or grow cereals. The best economic place is where the land value is the lowest and nothing else can compete.”

Tom Gubbins was a guest on the third podcast in QMS’ international podcast series, which explores ideas and examples of red meat production from around the world.