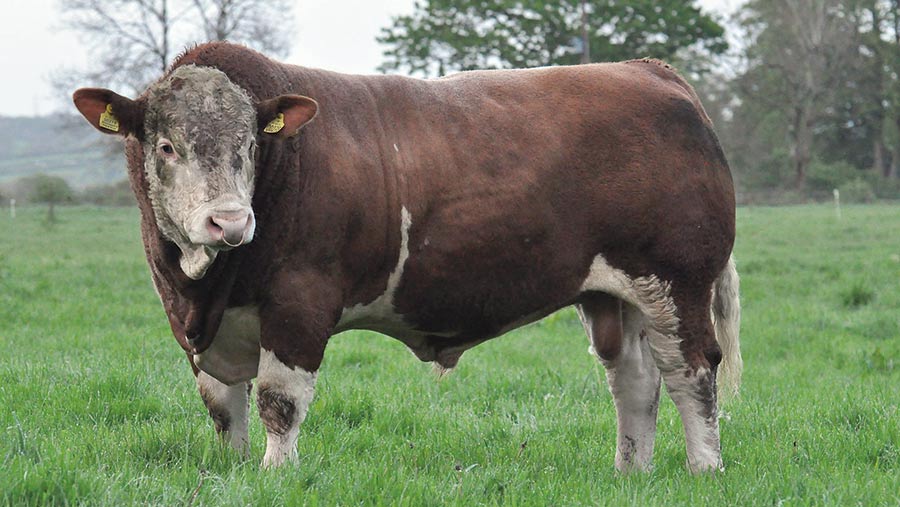 Selecting bulls with a positive calving ease estimated breeding value (EBV) should be a priority for suckler producers who are aiming to improve herd efficiency, a study has shown.

Researchers at Harper Adams University compared Simmental progeny from a top 1% terminal index bull and a Danish-bred polled bull with a top 10% index.

The Simmental cross British Blue cows were inseminated at random with one of the bulls in the winter of 2016, followed by a sweeper bull.

The bull calves were intensively finished at just over a year old in 2018. Creep was offered to the calves from four weeks old. Heifer calves were not fed creep after Christmas.

Bull calves were weaned when the cows were turned out in early April and intensively finished on a blend and good-quality maize silage total mixed ration (TMR) fed on a 60:40 ratio on a dry matter basis.

When a bull had reached one year and a trailer load of six bulls were ready, they were sent to slaughter, with the youngest killed at 365 days. 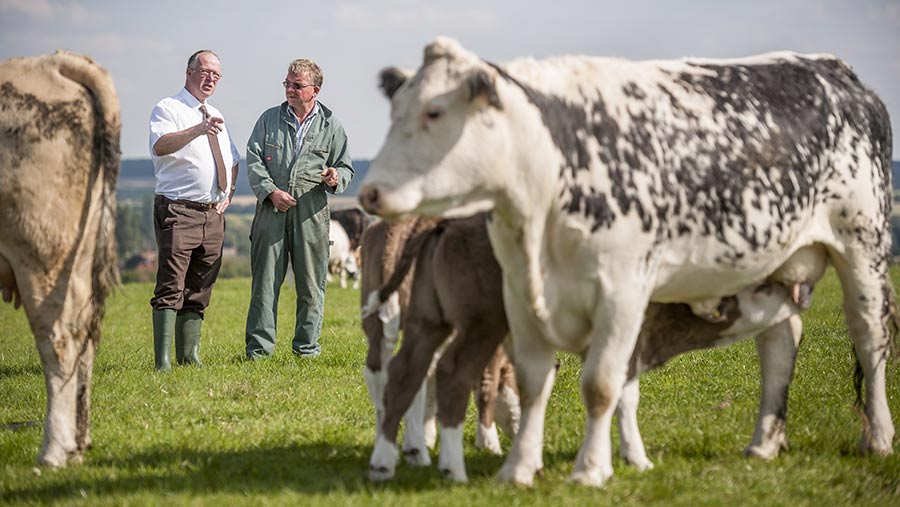 “The number one priority for any farm, though, should be selecting bulls with good easy calving figures. Through easier calving, the cows can calve down in fitter condition and get back in calf easier, and this overrides the growth benefits that a slightly better-growing, but harder-calving bull like Ferrari can offer.”

Mr Marsh adds: “The bulls were finished at just over 12 months old, which almost produces a ‘lifecycle of perfection’, with the old calf being slaughtered when the new one is born.

“Money can be made in suckler production and it’s about making sure genetics, breeding and health of the animal is right.”

Farmer Ian Willison says although Ferrari has good growth rates, he would choose Imperator due to his easy calving figures.

“The Ferrari calves had a higher mortality rate and this had a negative effect on the following conception rate of the cows. This is the first year we have calved to very easy-calving bulls.

The females had an incredibly easy calving and the conception rates have subsequently been fantastic after calving, with 85% holding to first service AI,” Mr Willison explains.

This means most cows should calve in first three weeks next year.

“There is also tremendous scope within the double-plus calving bulls (positive calving ease direct and daughters) to produce all types of male and female progeny to fulfill the role of the ideal suckler herd,” he adds.

However, Mr Willison stresses the importance of having the right cow. “While using a high-EBV bull is important, we can’t forget the breeding females that are made from generations of high-EBV genetics, whatever the breed.

“I cannot stress enough the importance of having the right cow for your farm to produce the right calf for the right market. There are too many cows bred ‘too terminal’, and that’s causing inefficiency.”