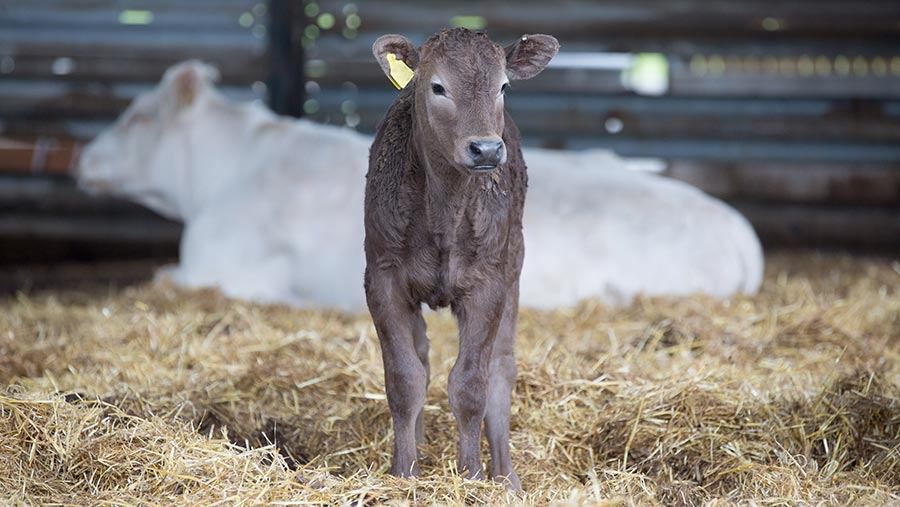 This is due to a lack of a maternal calving index and means bull buyers are being caught out when selecting bulls for breeding replacements.

Five major beef breeds have been found to have bulls that have positive maternal calving ease EBVs (or calving ease daughters) but negative calving ease direct EBVs. This means that the bulls’ offspring are more likely to be calved with difficulty.

This is according to statistical work undertaken at SAC Consulting at Scotland’s Rural College which looked at the breeding values of bulls offered at Stirling in February 2019.

“We must stress that EBVs remain a great selection tool for suckler farmers,” says Basil Lowman, SAC beef specialist. “They are valuable and time after time EBVs have been shown to work.”

Mr Lowman would like to see British beef breeds introduce a maternal calving ease index like those operated by the American Angus Association, the Jersey breed and EBV systems in the Netherlands.

Why is this happening?

Calving ease is affected by several factors, including nutrition, cow management and condition.

There are also genetic factors, namely:

The term “calving ease” is now widely known in the industry and is often used to refer to both calving ease direct and maternal, explains Mr Lowman.

However, calving ease maternal does not account for the effect the dam’s father has on the growth of the calf inside the dam, only his genetic influence on the size of the heifer’s pelvis.

This is why a bull’s figures might not always be what they seem, he explains.

What can breeders do?

When buying a bull on estimated breeding values (EBVs) to breed heifers, you need to add together a quarter of his calving ease direct value and half of his maternal calving ease value.

This accounts for the variation of impact the sire is having on respective traits.

In the case of bull one, half of his maternal score (+2) plus a quarter of his direct score (+2) gives an overall score of +4.

As the table shows, despite bull two being positive for calving ease maternal, because of his direct calving ease score, it is likely that he will produce heifers with no more ease of calving than bull three, who is negative for maternal calving ease.

Mr Lowman says: “This may seem like hassle to calculate the overall heifer calving ease value of bulls you are going to bid on. But it will be less hassle than breeding a herd of difficult calving cows and dealing with the reduced output and profit.”

He says these four traits correlate and geneticists know there are genetic relationships between them.

Mr Boon adds: “Producers using maternal calving ease as their main guide to selecting bulls to produce easier calving heifers are in danger of ignoring other attributes that will influence the overall outcome at calving time.”

His message to commercial bull buyers is to take all the information into account when selecting a bull.

He adds: “Breeding indexes (or sub-indexes) are designed to deal with this challenge, where multiple factors need to be taken into account simultaneously – and it is an issue that breeders who are serious about selecting for calving ease need to discuss with their genetic evaluation service provider to ensure appropriate index weightings are in place.”

Tips on heifer management for ease of calving

This is the bull’s effect on the shape and size of the calf, rather than the size of the pelvis, which is calving ease maternal.

Currently, UK systems tend to ignore the direct calving value of bulls when calculating calving ease maternal. This means a bull with positive calving ease direct EBVs will genetically lead to a large calf growing inside the heifer.

“The maternal calving ease presented in the UK is just that: the maternal part,” Mr Miller explains.

“If you were to create an index by adding half of the bull’s direct value it will not require a change to the BLUP [Best Linear Unbiased Predictor], just a simple calculation after the BLUP is over.”