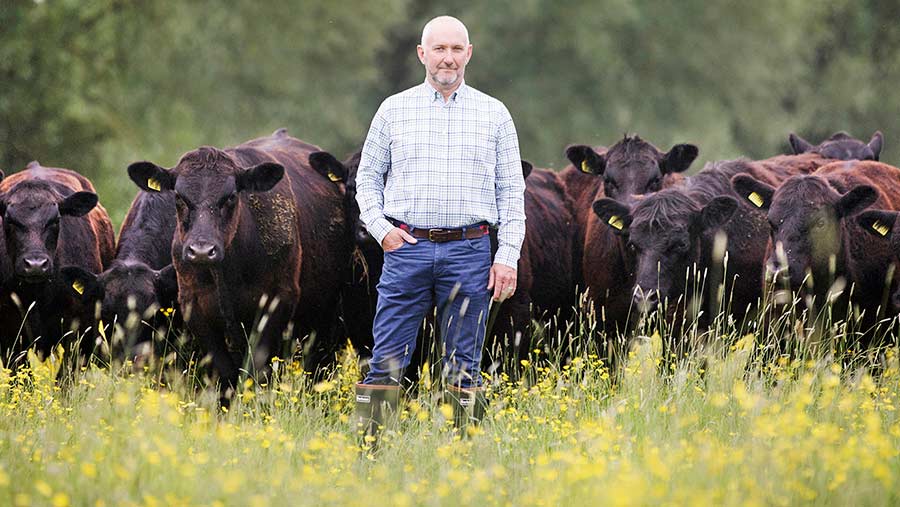 Compact calving, outwintering of all cattle and forage-only finishing is enabling herd manager Robert Huxley to run the 250-suckler herd at Yews Farm on the Longford Estate in Salisbury, largely on his own with a 2-2.5% mortality figure.

Cattle numbers were cut back from 450-head in 2016 after a decision was taken to control the herd’s fixed costs.

This has successfully streamlined an already low-cost system, with the herd managing outdoors all year with no hay or silage and now using only one full-time labour unit.

Extra staff are only brought in from the arable enterprise to help with gathering and working cattle. Other than that, Mr Huxley manages them alone, seeing only four calves die this calving period out of 235 and current mortality to weaning and sale at 0.5%.

With such huge alterations to the herd, the estate admits that budgets and costings need time to be calculated under the new regime to work out the impact on profitability.

Further changes also came last year when the first finished animals from the herd – which is three-quarter-bred Aberdeen Angus – were sold.

Although initially unplanned, due to having a major surplus of heifers after a 45% reduction in cow numbers, Mr Huxley opted to finish 60 heifers off grass last summer.

“We would like to think we will be running a more profitable herd into the future because we are reducing our labour costs while increasing income from the new venture into selling finished animals,” explains Mr Huxley, who has been managing the herd for 15 years.

“We could get an extra £400-£500 a head for 60 heifers each year for very little cost as we intend to finish heifers on our grassland, which has no fertiliser.”

No buildings or creep feeding are required by the herd, with all youngstock, cows and bulls outwintered. The cattle range on large expanses of permanent pasture from water meadows to chalky downland.

Steep-sided hills (1 in 4 slopes) and walks of up to 1.5 miles to the yard are common and mean cattle are sometimes only gathered three times a year, with small corrals in some fields enabling Mr Huxley to work very small numbers if required.

The herd is gathered no more than four times a year – TB testing, weaning, vaccination and a fly pour-on are the key jobs.

The foundation of the herd includes some Simmental, Charolais and Limousin genetics, although the farm has been focused on using purely Angus bulls since a change in farming policy 20 years ago. 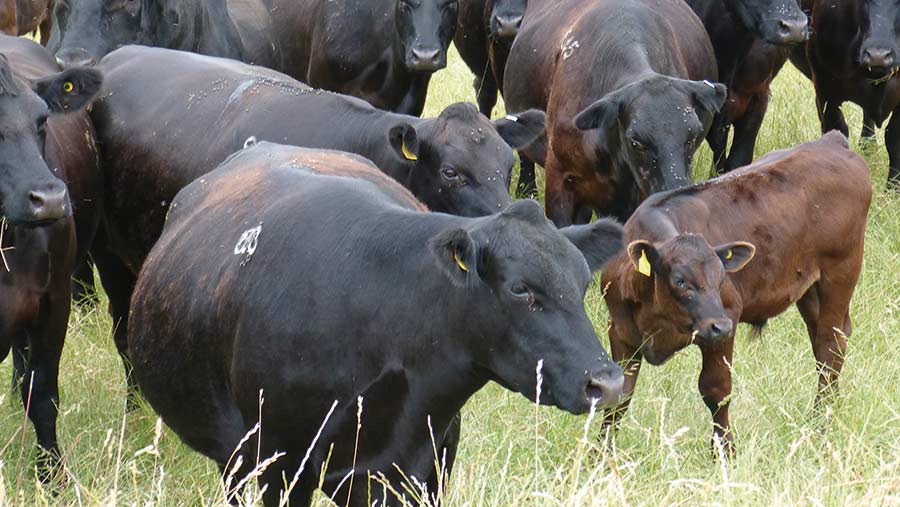 The herd at Longford

By running a tight calving block, each of the three groups of cows calves for 9 weeks. By buying high index bulls on EBVs and cutting out any fertility or health problems, Mr Huxley has achieved a good level of productivity.

Cows are expected to produce seven to nine calves in their life, with cows lasting 10-11 years. Each year 70% of the herd is in calf within six weeks of the bulls going in.

“When cows reach 11 or so we sell them straight off the farm, getting an Angus premium at Pitstock, Telford, and usually a cheque of £1,300-£1,400, so it does pay to cash the cows in and not hold onto them for the sake of it,” says Mr Huxley.

Calving outdoors, the system requires the herd to calve themselves, with Mr Huxley assisting less than 1% last year and generally no more than 2-3%.

“We had a backwards calf, one set of twins and a swollen calf; apart from that, they managed on their own,” says Mr Huxley. “I don’t go out at night to watch them and I don’t help calves suckle – they don’t need it.”

A calving notebook records which cows are having calving issues and which bulls are leading to big calves. Freeze-branding is done on the shoulder for easy identification as this area stays cleaner, he explains.

Cows calve for three months from April to June, with four groups of cows run in herds (first calvers, second calvers, third and fourth calvers and older cows) to calve in batches every 10-14 days.

Tagging and castration has often happened by day two or three of a calf’s life. Temperament is very important and is a culling offence, although first calvers are given a chance for minor misdemeanours. 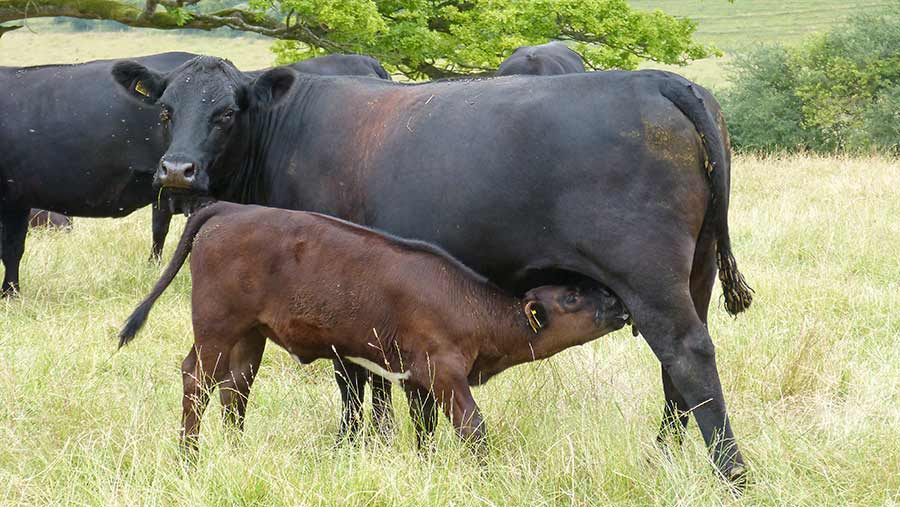 Although historically a store cattle-producing herd, the Longford herd took 60 heifers through to slaughter after selling the remaining surplus as breeding stock after the herd downsized.

Commanding an Angus premium, the heifers sold for £4.05/kg-£4.20/kg into meat processor Dawn Cardington through Farm Mark, after Farm Mark director Paul Jeenes advised the estate to consider selling the animals prime. Cows are sold to Pitstocks along with some prime animals, also through Farm Mark.

Most youngstock are sold at 15 to 16-month-old stores off farm, with some sold at Frome and Salisbury.

Wiltshire’s light, chalky ground is ideal for outwintering on and the arable enterprise produces 90ha of stubble turnips and 40ha of winter grazing rye to winter the calves after they are weaned at 9-10 months.

The herd is usually taken off pastures by early November and moved to wintering ground until mid-March where cattle are given 50m x 60-70m of straw bales to nest and winter on stubbles.

Extra minerals and energy are supplied by mineral buckets – no hay or silage is given.

“The cattle eat the straw or nest in it as they wish,” explains Mr Huxley. “They can feed on the blocks as and when and I can manage myself with no hard work feeding and mucking out through the winter.”

Bulls are bought from Stirling each year and tend to run across 30 females each, with 11 bulls serving the herd, although some are required to bull up to 60 in a summer.

“I study the EBVs and health status of the bulls – particularly looking for high milk percentages and ease of calving – and narrow them down that way, before having a look at them,’’ he says.