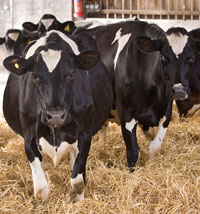 Producing the ideal cow to cope with future constraints may seem a challenge, but using genetic indices may be the key to a profitable and healthy herd.

To be competitive in five years’ time, producers will need to be milking more cows with less intensive management. This is assuming margins on a “per cow” basis will be tighter and less skilled labour available.

So the dairy cow of the future will need a combination of qualities to remain profitable, says Bullsemen.com managing director Nick Kirby.

“The cow of the future will need to be highly productive, yet low-maintenance, and while this may seem a challenging target, it does at least create a ‘wish list’ to which every dairy farmer can aspire,” says Mr Kirby.

He believes dairy producers should follow a “top 10” requirement list to produce the ideal cow to cope with future constraints. “Careful selection of available bulls using the Profitable Lifetime Index (PLI) system as the primary criterion is a good starting point,” he says.

Historically, says Mr Kirby, producers have tried to change the cow’s exterior for better function – making her taller, longer, more “dairy”, wider-rumped and with a shallower udder. “And while some of these physical characteristics remain relevant, most things on our ‘wish list’ cannot be judged on the cow’s appearance.”

Most genetic indices are expressed as Predicted Transmitting Abilities (PTAs), predicting the extent to which a particular trait will be passed on to an animal’s offspring. “Production trait indices for milk, fat and protein are well established, but those relevant to health, welfare and fitness are more recent and are increasingly important in our quest for the cow of the future,” he says.

Developing cows with a lower somatic cell count and reduced mastitis can be accomplished by looking at a bull’s SCC PTA. These are expressed as a percentage and generally fall within the range +20 to -30. For every 1% in a bull’s SCC, a change of 1% in his daughter’s SCC is predicted. “In this case, negative figures are desirable and, because of the strong linkage between the two, SCC can also be used as a selection tool to reduce mastitis incidence,” says Mr Kirby.

“When selecting bulls, emphasis is usually placed on sire fertility rather than the bull’s genetic potential and too little emphasis on the future daughter’s ability to conceive.”

The UK now has a PTA for female fertility (FI), which is based on a combination of calving interval and non-return rates. On average, for every £ increase in a bull’s FI, an improvement in his daughters’ calving interval of just under half a day is predicted.

“Several things on the wish list contribute to a cow’s longevity – such as ease of calving, milking with minimal problems and staying out of the sick pen – and these are all part of a trait called Lifespan,” says Mr Kirby.

“Lifespan is a measure of how long daughters of one bull stay in the herd compared with another and, in the end, profit comes from multiple-lactating cows. Lifespan is also a prediction of involuntary culling as opposed to voluntary culling, and is, therefore a measure, of that daughter’s ability to survive and her inability to produce milk.”

If the “wish list” represents what you would like to be breeding for, the question is how to sort through the available bulls to arrive at your cow of the future. This is where the Profitable Life Index (PLI) can be used, bringing together all the key PTAs contributing to the goal of a high-production, low-maintenance animal.

The PLI is made up of production traits (45%) and fitness traits (55%), with the latter comprising Lifespan, Fertility Index, SCC, udder and locomotion. So using the PLI figure is the first and most important bull selection indicator.

Mr Kirby advises starting with a minimum PLI requirement for any bull used, recommending a minimum of £100. “Producers can then look at three or four individual PTAs depending on individual herd strengths, weaknesses and requirements,” he says. “But don’t compromise on the minimum PLI.”