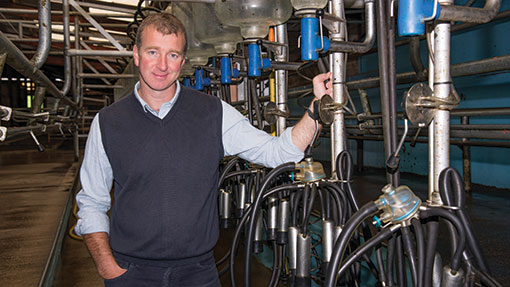 The challenge of writing a short piece like this with two weeks’ lead time is to make it timely and relevant, so please forgive me if my predictions regarding the milk price are more than a little speculative. Just as we start to get used to a good milk price, the long-awaited optimism our dairy industry needed seems to have come to a shuddering halt (if it hasn’t yet, it’s about to).

Since early 2014 the farmgate price has been out of pace with the markets. The combination of a surge in production across the EU, coupled with reality of the markets, which are as much as four or even five pence a litre adrift from the producer price, means the pressure on prices shouldn’t really come as a surprise.

For the first time in 20 years, dairy cow numbers are rising across the EU. There’s nothing like a good milk price to help strengthen supply. In 12 months’ time quotas will be history and a new era of dairy farming will be dawning on us and I think the next few years are going to be as challenging as we’ve seen for some time.

Many of us dairy farming today have never milked cows without the restriction of milk quotas and perhaps do not realise the level of unpredictability that may dominate the new quota-free world and the certain period of painful restructuring.

We may think quotas have had limited influence for several years and while that’s the reality domestically, where we’ve lagged well behind our limit for a number of years, several of our near EU neighbours are ready to increase production dramatically in the new world post-quotas.

It’s inevitable that there will  be casualties both within and  without the farmgate, as even the most robust businesses are put to the test.

On a more positive note, the 2014 grazing season is off to a great start, with the cows in both herds producing well at just over 2kg milk solids a cow a day, with minimal supplements.

With a large area of land out for reseeding at Dolphenby our target of 550 cows milking for the season has been revised back to 520, which is giving some local farmers the opportunity to pick up some cracking young April-calving cows.