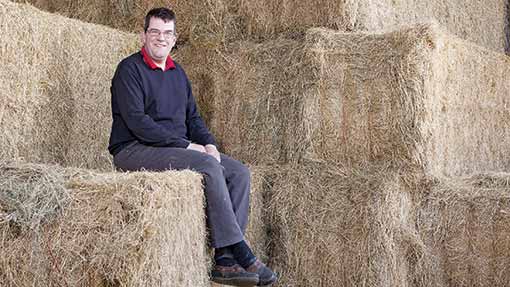 I am writing this somewhere over Asia as I fly back from a brilliant eight days in Australia.

I went as a guest of Genetics Australia, who are the largest farmer-owned AI co-op in Australia and are based just north of Melbourne. I am delighted GA has started to market four of our British-born and bred Angus bulls and a Simmental bull from our friends at Sterling Simmentals. Everyone was keen to try some of our genetics and I hope going forward this will be a great market for British breeders.

While down under, I had the chance to visit several beef and dairy farms and a few things stand out. First is the incredible distances the cows walk every day – on many farms cows were walking more than three miles a day and a few even further. The cows, not surprisingly, had outstanding legs and feet, coupled with perfect rumps and excellent locomotion. Most farms had no cow accommodation, as the cows live outside 365 days a year and are mainly spring calving.

The beef cattle were also on extensive systems and were in massive paddocks. The other thing that struck me is how good the farmers have to be at managing water. Most have dams and some irrigation equipment and you can see water is a bigger challenge than both labour and milk or beef price. I know we get the odd dry summer in sunny Dymock, but our dry summers are nothing compared with what our cousins down under have to deal with.

I also spent time looking at retail outlets and was pleased how agricultural products were being marketed. McDonalds are everywhere and were really pushing Angus burgers, which was great to see, plus a lot of emphasis was being put on A2 milk (containing a different protein to standard milk), with huge marketing banners up in both Sydney and Melbourne.

There was time for some sightseeing as well. My friends took me to a game of Aussie Rules at the MCG, which was a great experience. I just had to ignore all the cricket jokes – apparently we lost a game of cricket there in the winter.

Paul Westaway farms in partnership with his wife Kirsty on a 69ha Gloucester County Council farm, running more than 220 Angus and Holstein Cattle. The pair also run an AI business and have recently launched an online steak and wine shop.