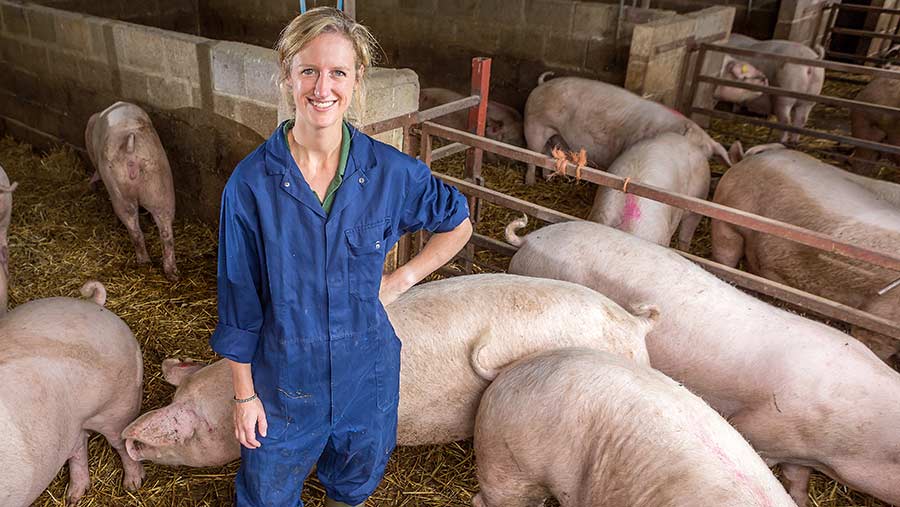 As former Livestock Farmer Focus writer Kate Morgan has now passed over the pig columnist reins to me I thought I’d begin by introducing myself and the farm.

I’m Sophie, I’m 32 years old and have a 14-month-old son who is already obsessed by farm machinery and his cuddly toy pig.

I returned to the farm in 2013 having done a fantastic and varied stint at BQP – one of Britain’s largest pig farming companies.

Alexander & Angell (Farms) was taken over by the Hope family in the 1970s and is now in its third generation of management. My dad, Andrew, is still at the helm with me taking on more responsibility.

My grandfather, John, worked for Mr Alexander and Mr Angell from the 1920s – when the company was known as Double A – before buying the farm.

Pigs and poultry form the core of the business with several subsidiary enterprises including a DIY horse livery and a pick-your-own fruit farm out on a farm business tenancy.

After my grandfather won supreme champion twice at the Royal Show in the 1950s for his Large White pigs, he realised that what a pig looked like didn’t necessarily correlate to how they performed on farm, so he started the Cotswold Pig Development Company in the 1960s.

Fast forward to the early 2000s and we had switched from being a multiplier for JSR to running a commercial herd.

We run 380 sows indoors on a predominantly straw-based system finishing 10,000 pigs a year.  The majority of these are on a direct contract with Tesco with the remainder go to local abattoirs.

Although the herd is free of porcine reproductive and respiratory syndrome and enzootic pneumonia, we have an underlying issue with Actinobacillus pleuropneumoniae .

It hit us hard a couple of years ago but we now see few clinical signs and are managing it well with vaccination. We recently switched to a five-week batch system, having run a continuous weekly system since the dawn of time.

This enables us to wash and disinfect finishing houses between batches, so hopefully further improving herd health.  I will tell you more about our experiences with the switch to batching next time.

Sophie Hope farms 380 sows indoors from farrow to finish, producing 10,000 pigs a year direct to Tesco as well as 81,000 broiler-breeders. A straw-based system is currently in place with boars from composite commercial lines and some Hampshire used for hardiness.