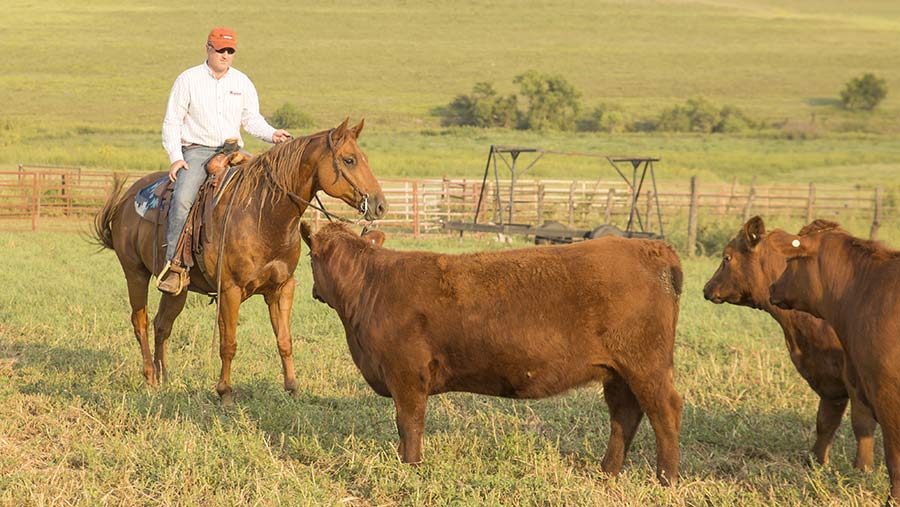 May is one of my favourite months of the year in Kansas. We burn our pastures every year in this area and, as we’ve received good moisture, it is really green now.

I have never been to Ireland, but I think we could beat it at this time of year. Even better than how it looks is that the cattle can eat it.

All our feed trucks have been taken to the local mechanic. We keep on breaking things because of all the rocks on the ranch.

When the feeding stops, it not only means we aren’t spending the money on feed, but we are also no longer destroying our equipment.

I didn’t work this Sunday for the first day in months and it felt great.

In mid-May, we do the spring cattle work. Calves will need processing, and since we AI every cow, there are several thousand trips through the crush.

Most of this is done on horseback, so it doesn’t really feel like work at all, and the AI season remains one of my favourite times of the year.

I think it is one of the most optimistic processes in all of agriculture. We will do 500 heifers and 400 cows this year.

It is a couple hundred less than last year and actually feels much more manageable. I am breeding cows for people in our area more and more, too.

I will probably pick up and breed another 150-200 head as a “side hustle” as work for a neighbour. The extra money allows me to support the Scottish whisky market.

My neighbour’s cattle are probably 75% Black Angus, but we will be using Red Angus bulls this year.

The market had demanded black-hided cattle here for years, but during the past several years it has started to change. I suspect it will be like when the Hereford breed fell out of favour in the 1970s.

The people in charge ignored the change until it was too late. If nothing else, they will like those red calves in this green grass – the colours just go together better.