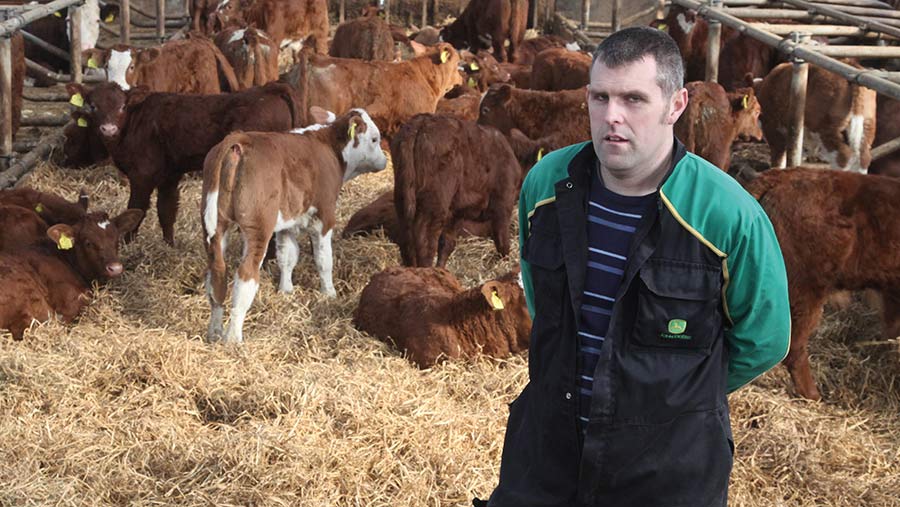 March’s weather has been everything that February wasn’t. It has been very breezy some days, but there is nothing better than a south-easterly wind to dry the land up.

The dry weather came just in time to get some slurry out. I don’t have 22 weeks’ slurry storage yet and I would argue that I don’t need it.

I am lucky enough to have some dry fields and I want to put slurry out in March to get the grass growing. If nothing else, it moves the geese on for a few days.

Calving is well through, with just 10 cows left to calve at the time of writing. We have had eight sets of twins this year.

Only one of them was born dead, so it’s been a bonus overall and made up for a poorer scanning.

We normally get three or four sets of twins, which I always thought was down to the amount of Simmental genetics in our cows.

That theory has been turned on its head this year as six of the cows to have twins are Salers-crosses.

The ewes carrying twins were housed in early March, which is a month before lambing.

Lambing sickness is always a risk just after housing with the change of diet, but we have had good success over the past couple of years using a calcium and energy drench, and further calcium if it’s needed.

Unfortunately, we have lost a couple of ewes this year and have needed to drench far too many.

The vet came and took blood samples. Energy levels were fine, but it turned out they were low in calcium. We changed from feeding cobs to feed blocks. It turns out the cobs had only 1% calcium, but the blocks contain 4.6%.

Obviously there haven’t been any school visits to the farm for more than two years. This is something I have missed.

When a teacher from a local school contacted me to ask if I would be happy to give her class a virtual tour around the farm, I jumped at the chance.

They have tuned in twice already and are planning to do it again during lambing. I think we need to take every chance we get to show folks what it is we do.