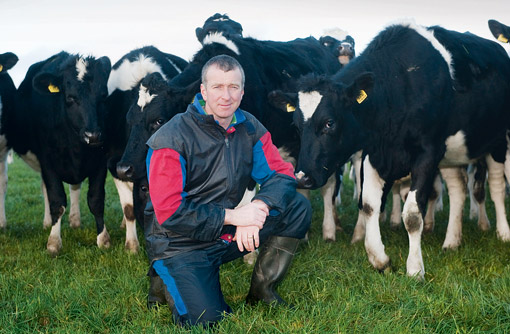 With just over 1,000 inseminations already between both herds in the first three weeks of the breeding season, it’s clear where our focus has been recently.

Following many years of success using tail paint for heat detection, this year we’ve opted for a different approach using sticky scratch cards instead. The main benefit is rather than having the hassle of having to continually top-up the tail paint, once on, the stickers stay in place and are only replaced when rubbed off during a heat. Early indications from the team are positive and it seems that most of the staff prefer them as they gives a more definite and easy to spot signal whether the cow is in season or not, where as tail paint can be more tricky to read, especially where several people are sharing milking.

Congratulations to the team at Dolphenby for winning the First Milk Lake District Creamery milk quality award. A fantastic achievement, especially as it’s for our first year on the farm.

As I write, silage-making is taking place at Dolphenby, with close to a third of the available grazing area being cut and taken out now at the end of May. Re-growth should be available to re-enter the grazing round towards the middle of June, when a further area will be taken out for more silage. More silage will be made around the middle of June, this time coming from the youngstock grazing block, ensuring adequate silage stocks and good-quality grazing for the midsummer part of the season. Silage making at the slightly higher altitude at Cairnhead is still a week or two away and likely to be around 10 June, largely due to the slow cold spring, but also not helped by a slightly higher stocking rate.

With a small amount of rejection starting to appear in some paddocks, pre-mowing will start to be practiced during the next couple of grazing rounds where necessary on both units. In the past we’ve found the best time to start to pre-mow is just before you think you need to, this not only avoids forcing the milking herd to eat poor-quality grass, but also reinstates pasture that’s become stemmy, mature and unproductive back to high-quality grazing.