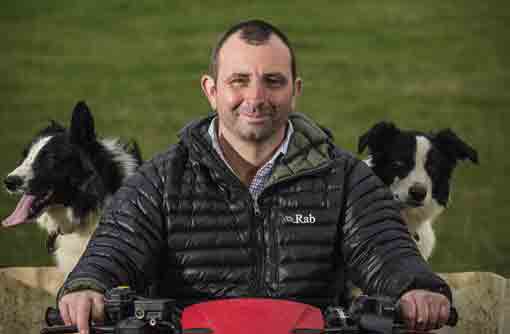 At the beginning of May only two pairs of swallows had made it back to the farmyard. Maybe the rest had hit bad travelling conditions and stopped off at a Premier Inn. By the middle of May the yard was littered with them.

It does not matter what species you are, farmer or public, seeing them come back always puts a smile on your face.

Lambs are thriving even with a short, but green, sword of grass. I’ve opted to feed the ewes a bit longer sooner than creep feed the lambs. Sheepdog trialling has been put on hold as farmers have been ringing up wanting their failed crops drilling with alternative spring crops.

We have never had such a busy spring.

By the time you read this Rob (my young apprentice) and I will be on a wool board shearing course under the guidance of Doug Lambie. We have been on one before and highly recommend it to anyone.

I’ve been cutting back the pies and lager and jogging with my dogs a bit more so I can make a last ditch attempt to keep up with young Rob when we start shearing.

I will be putting on a sheepdog trial in aid of Cancer Research as part of the Open Farm Sunday for Sutton Estates, Stainton le Vale. It’s on the 8-9 June in the picturesque Lincolnshire Wolds.

All the top names will be attending so please come along if you’re in this neck of the woods.