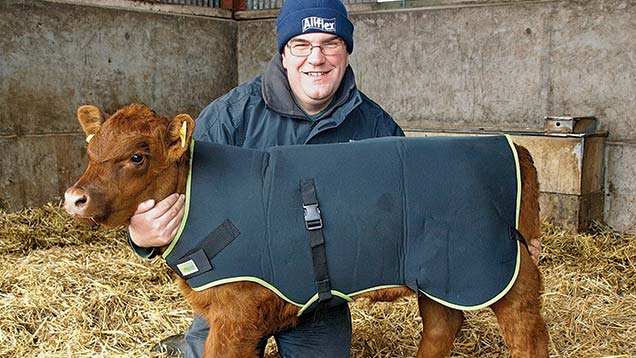 In Dymock, 2015 has got off to a quiet start, with the weather being wintery, but not too extreme – except a storm this week that made a mess of Kirsty’s dad’s greenhouse. But I was pleased to find some daffodils raising their heads, which tells me spring is just around the corner.

We have tried using calf coats on our October and November calving groups and I have to say I have gone from a sceptic to a convert. We have put calf coats on all calves the moment they are dry after birth.

We catch the calves to tag and weigh them, as well as spraying navels and giving them their vaccinations, so it’s simple to do. We keep the jackets on for 10-14 days before washing and using them again.

I am convinced the calves are getting off to a better start and look really happy. This has been backed up by some trial work that Harper Adams published just before Christmas.

I was lucky to spend some time in France last week looking at a new business called Adena, which is a fully integrated tissue sample, test and store system for animal DNA.

One of my frustrations is we are still pulling hair from calves’ tails and sending different samples to a variety of labs for different tests, creating unnecessary cost and work.

There is also a big debate on who owns the results. What I like about Adena is the samples and results belong to the breeder or owner of the animal, which is key to breeders like us who are investing heavily in our genetics and health programmes and want to control our intellectual property.

I am also incredibly proud of the research and development team at Eblex (of which I have the privilege of chairing).

They have worked incredibly hard to secure £1.5m government funding to build a fully integrated feed efficiency system that will benefit every cattle farmer in the UK.

Anyway, enough of this great stuff, I need to go and get some of the greenhouse out of the calving paddock.

Paul farms in partnership with his wife Kirsty on a 69ha Gloucester County Council farm, running more than 220 Angus and Holstein Cattle. The pair also run an AI business and have recently launched an online steak and wine shop.