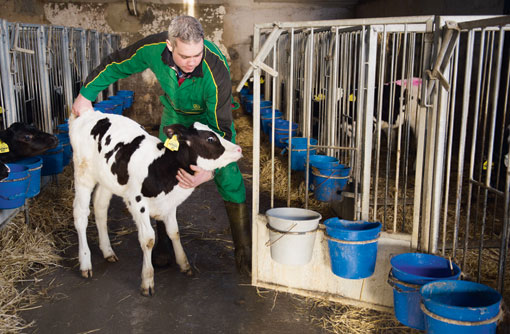 It’s starting to seem like the summer here in Northern Ireland has been and gone in about 10 days. A very warm dry spell lasting over a week allowed all fieldwork to be completed, and this has now been followed by cool, damper weather. Grass growth has been fantastic, but it has caused another problem. We now have slightly too much in front of the milkers, so we will remove some of the paddocks to make big baled silage. I’m sure this will be used over the winter months ahead.

Calving has eventually finished, but for some strange reason the last eight to 10 cows and their calves gave us more grief than the 400 born before them. We really like our vets, but having a vet in the yard seven times in seven days isn’t something I really wanted to see. The cows had difficult calvings, which probably didn’t help them. All calves received four litres of colostrum within two hours of birth. Unfortunately, two of the calves (heifers, of course) died within 48hrs of birth, which is quite unusual here. The postmortem results from Stormont revealed E-coli was to blame. The first 30 cows due to calve at the start of August have been dried off. We are now trying to ensure the calving area is rested both before and during our nine-month calving period. Obviously, the sheer volume of stock moving through must be starting to take its toll.

Greenmount Agricultural College has just opened its new state-of-the-art dairy unit. I recently enjoyed a tour of the new facilities. Quite a change has occurred since I studied there over 14 years ago. The attention to detail and forward planning in the unit is extremely good and really has set the college in a good position for the future. It’s been just over three years since we finished the dairy unit at Rowreagh Farm, but it’s amazing how things have advanced in those few years. The unit will provide an exceptional teaching facility for CAFRE students, while also demonstrating innovative technologies for the whole dairy industry.