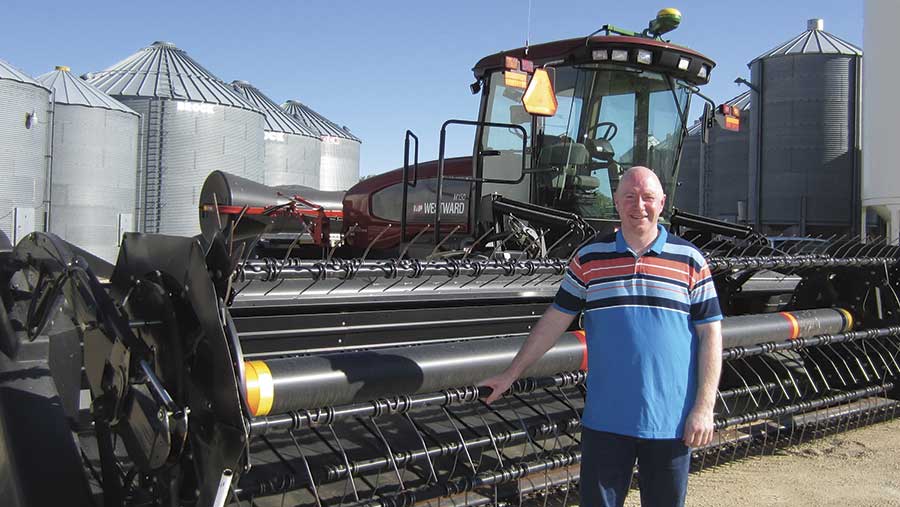 Gary Mitchell on a farm in Canada

After a 28-hour flight delay I finally made it to Canada – first to Quebec where I had privilege of visiting four well-run dairies with cow herds of between 70 and 300.

Thankfully, they were all free-stalls (cubicles).

A big percentage in Canada are still in tie-stall barns, which I think is awful – cows tied up for their nine-month lactation and very few cows are grazed.

The problem in Quebec is you can’t move quota from farm to farm.

So if you bought a dairy farm next door with a 30 cow tie-stall, you would have to continue milking there – but with a guaranteed milk price around 45p/litre.

See also: Can we be sustainable with milk income shifts?

Back in the UK, I think we seriously need to look at the creation of some kind of milk federation to control volumes required.

Why could we not introduce a law that every farmer has the right to be part of the federation, regardless of the processor they supply.

The federation would receive forecasts from every processor on their annual milk supply requirement. Then decisions could be made on whether we need to increase or decrease production.

We live in a generation where the environment is of great importance. So is milk slushing around the UK at 7p/litre good for the planet or our rural economy? Certainly not.

The processors have had great fun playing the A&B game to protect themselves from their careless ways.

On the rumour front, I hear Muller producers are going to throw away the opportunity to create a producer organisation with the Dairy Crest model, which I think they will regret in the future.

Back at home, I’ve been waiting for some dry weather to start the wheat harvest and then third cut.

As I left Manitoba on 13 August, rape swathing had just started and it was 30C.