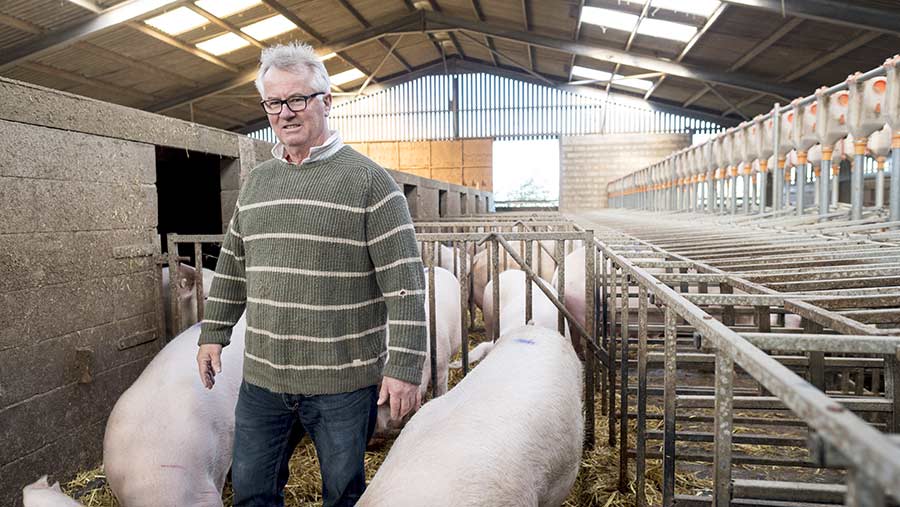 This past month we have been experiencing respiratory problems with the finishers in our naturally ventilated straw yards.

This seems to be the result of a perfect storm of weather. We have had cool nights following mild days for this time of year, with some days being damp, misty and windless.

Poor straw quality doesn’t help, as I mentioned a couple of months ago. Furthermore, there is too much waste water in the yards as a result of Red Tractor deciding in its wisdom that we should double the number of drinkers in the yard.

I fought this rule change at the time, and to be fair to them, they did make a concession.

In Red Tractor’s favour I must say that over the hot summer months the extra drinkers did benefit the pigs and their welfare, but now we are just experiencing water wastage and fewer dry lay areas.

It looks as if we will have to remove more than 200 drinkers twice a year and adjust the flow slightly.

We had a great night recently in London at the Royal Lancaster Hotel celebrating the British pig industry.

Organised by Pig World, the National Pig Awards has 14 categories and I was fortunate to be a judge in the Stockman of the Year and Manager of the Year categories.

We had another year of record numbers of entrants and more than 400 people at the awards night.

I find it inspiring to see the hunger and dedication these young people show as they embark on a career in the pig industry, but it does seriously worry me that staff retention is not great.

We should all be doing more to address this problem. It’s not surprising that the farms that win awards have settled and dedicated staff.

It was particularly pleasing for my wife Lizzy and I that the Chris Brant Award – for the unsung hero of the British pig industry – went to Rita Wells.

She not only loves her role on the farrowing side of the farm she works on, but also spends some of her free time promoting British Red Tractor pork across the UK with Ladies in Pigs.