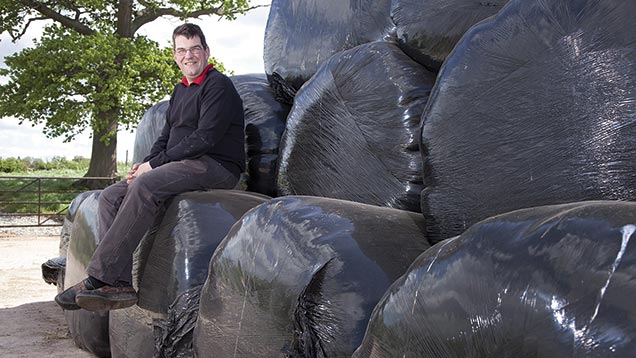 Spring is slow to get going here, and as we enter April the soil temperature is low and there is very little grass about. We’ve had several hard frosts in the past couple of days, which is holding back grass growth.

The cold snap has allowed us to get all the muck on the maize and wholecrop ground with minimal fuss and mess.

I am always impressed with the way our contractor James’ muck spreader chops the manure into such small bits, which allows really excellent spreading.

We are going to plough and subsoil this ground now and the triticale/rye grass/white clover will go in as soon as possible.

My gut feeling is we won’t be drilling our maize until at least 20 April, which is 10 days later than normal unless we get a heatwave soon.

As we have been increasing cow numbers I have invested in a mixer wagon. Up until now we have been putting feed out along feed fences with the shear grab and pouring blend on top, which has served us well, but we have so many cattle now, and I want even more growth quickly, it was time to take the plunge into the world of TMR.

We have been using the wagon for just over a month now and I have to say I am impressed with how easy it is to use and how much time it is saving.

It’s early days, but I think we have lifted intakes by about 10% and I can already see small increases in daily liveweight gain.

We are just about to start calving, with a big mob due from 1 April onwards. We actually had the first one calve yesterday – she was a week early and had a set of twins, but as you can guess they were mixed.

Both are bonny calves and have their new jackets on and look great. Mum has a pile of milk so hopefully she can rear them both well. However, the children love to feed a calf on milk so we may take the smaller calf off mum to give both a better chance of reaching a good weaning weight.

Paul farms in partnership with his wife Kirsty on a 69ha Gloucester County Council farm, running more than 220 Angus and Holstein Cattle. The pair also run an AI business and have recently launched an online steak and wine shop.