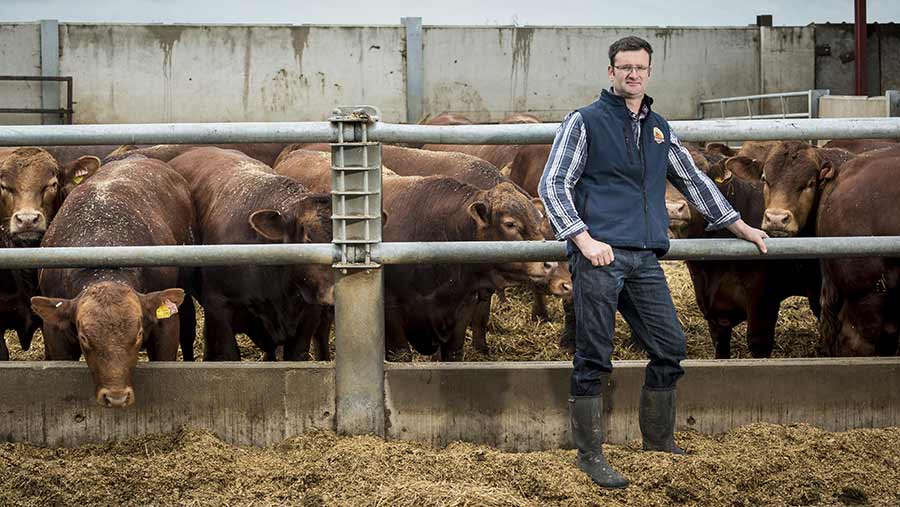 Now then, there’s been no sleep until bedtime at Osgodby Grange of late. Harvest is over in record time.

All the yields were down on all crops across the board, which isn’t a surprise.

Since I last wrote, we have cleared out all the young bulls and we are now filling up with stores a month earlier than usual due to the drought conditions, with suckler breeders having very little grass.

These have all been weighed in and are, on average, 56kg lighter than the same cattle last year.

We are feeding 20% more feed to the stores on arrival because they are ”big, empty houses” and once we have caught them up, which is taking about a month, they are settling down into a more normal feed regime.

We are more or less self-sufficient in our requirement for straw here. The price of straw has been much hyped up on the open market. However, it would be nice to think farmers could swap straw for muck on a national scale.

The soils in the arable parts of the country are screaming out for organic matter, but I know through being a member of  the Trade Assurance Scheme for Combinable Crops that back-loading with farmyard manure to keep the feed or straw wagon full for both legs of the trip is a big no-no.

To keep our feed lot bedded up we need to bale in the region of 4,000 bales. Baling is one task, moving them is another, so for the third year running the “super C “ has been unleashed.

This is where you clank together three articulated trailers and dollies to form a road train. A fourth trailer would be a “super D”, and two is a “super B” – the “C” is 170t in length, 48.6t in total, with 72 round bales on and 400 ponies (horsepower) up front.

We can move and stack 150 round bales an hour if we really try to get on. In homage to ice road truckers we have sprayed the wheels with a yellow strip so we can see in the mirrors if the brakes have frozen on.