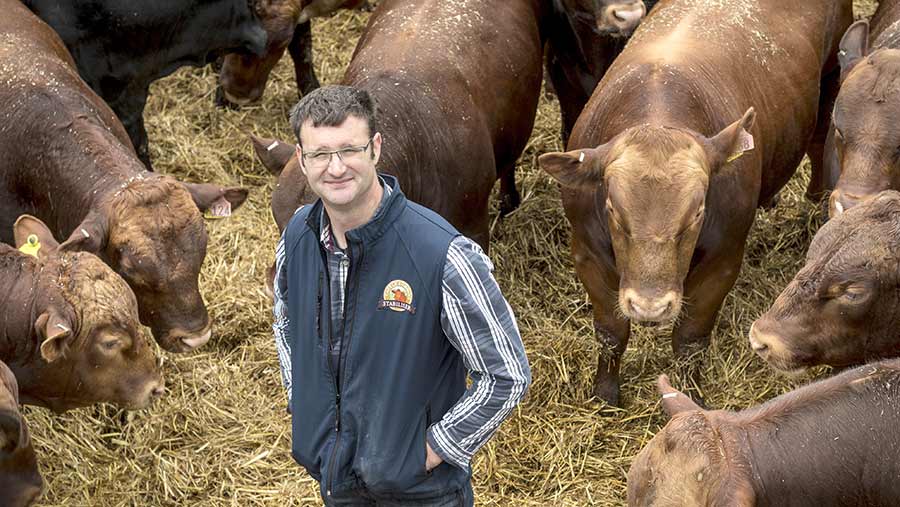 Now then, welcome from the republic of Yorkshire, where we missed February ‘fill dyke’ but got rain to make the average up in March.

The spring barley was drilled into ideal conditions on the ‘man’s land’ (heavy soil), and ended up being fairly slotten (waterlogged). We have more or less got away with it, with just the headlands being a bit dubious.

On a recent weighing session, the young bulls were doing between 1.65kg/day and 1.9kg/day depending on maturity and how much testosterone was flying about.

As of yet there are still too many cattle kicking about due to a lack of demand, and with bull season fast approaching – when lots of bulls hit slaughter weight – it’s adding more pressure to the market place.

We have also weighed a good number of clean cattle with some interesting results. There was a couple of standout, dual-purpose breeds that did well, with Montbeliard doing 1.61kg/a day over a 90-day finishing period, shortly followed by Fleckviehs doing 1.59kg/day.

While on a short break in France with the family, Pam and I enjoyed Cote de Boeuf Charolaise. To say it was one kilo (35 oz) it didn’t take much effort to eat.

The ‘boeuf’ was exceptionally good – dry aged for an eternity. It could have been eaten with a spoon.

I have to say the French really know how to cook beef. They just launched it into an open-hearth fire, rustled it around in the embers for about 30 seconds et voila.

We have now firmly come into the 21st century with the purchase of a newer maize drill, going from boat coulters to disc openers.

The intention is to venture onto some more marginal maize land and  do a five-year trial of continuous maize, interspersed with a cover crop.

It will then be followed by a good mucking, then back into min-till maize to get on top of the black grass and put some fibre and natural nutrients back into the land.

Hopefully, after the trial we will have eliminated the black grass with the late spring-cropping regime and ended up with soil that is friable and full of humus.