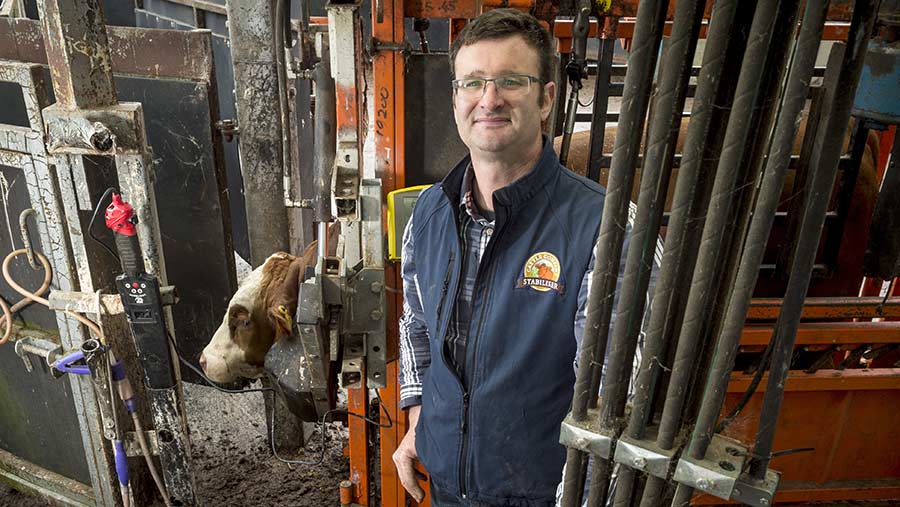 Now then, as I start to write this article we are having a mass disembarkation of cattle – mainly young bulls.

As my spring-calving customers – who pay me to finish their cattle – become more efficient and create tighter calving patterns this causes problems at the finishing end of the cycle.

As a finisher we have a very tight window and specification to hit, with young bulls 300kg-400kg deadweight on an R3/4L between 12 and 14-months-old. It is a seven-week window if all goes according to plan.

Rightly so, my customer – the producer of the cattle – want their animals to hit specification, which we endeavour to do. The problem being the processor only has so much allocation, which can cause friction between all parties.

From the processor’s point of view they require cattle 52 weeks a year and it is difficult for them to accommodate the hills and the holes in the production cycle.

There is no easy answer to this problem. Spring calving can be the most efficient, low-cost system. Autumn-calving beef herds involves extra costs such as bedding, feed and shed space. Steers may be the answer but as a beef animals they are not as efficient as bulls, lagging behind in growth rate and feed conversion rate.

We do a lot of cattle weighing here, which, although we are rigged up, is hard work, stressful for the beast, and time-consuming. Every time we run a beast over the crush there is a cost implication of 27 pence per head – that’s processing one every 36 seconds.

If that seems slow it’s a 100 an hour. I have been looking at various methods of simplifying the whole procedure.

The pig industry is already using a 3D scanner mounted above the pen to generate weight data within 3% of actual bodyweights. Hopefully, they could adapt the software to monitor cattle.

Time permitting, now harvest is in full swing, I have been attempting a bit of wheeling and dealing with the end goal of buying a 12ft four-blade prop from a Vickers Viscount airliner. There are only two problems: one is getting it home, the other is mounting it on the living room wall.