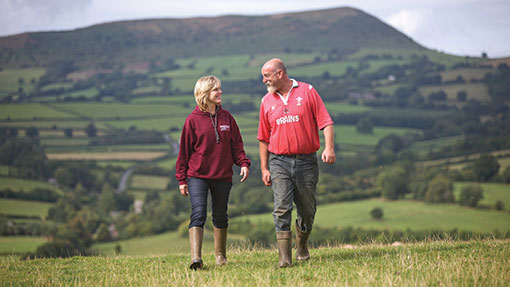 The sun shone for the Spring Festival at the Royal Welsh Showground in May, where we had our “Kate’s Country School” interactive stand and were judging an impressive array of sheep. It’s a lovely show, smaller than the main one in July, with much less leg ache at the end of the day.

Oak was out well before the ash, so we should only be in for a splash this year. Spring arrived early, confusing some of our wildlife. Seasons aren’t what they used to be and we may well have to adapt our farming methods according to climate change.

With the warmer weather come the grubs and shearing season is now upon us. Our son Sam recently received a shearing lesson alongside his older cousins, who have now earned their silver seals.

Jim has had his gold seal for many years, but it’s nice to see the youngsters coming through and taking over the shearing runs. Jim and his brother Huw now join them for occasional sessions only.

We all have to know our limits and Jim is currently having physiotherapy on his shoulder. I’m sure many farmers reading this will sympathise with agricultural aches and pains.

We breathed a sigh of relief when we had our second consecutive clear TB reading in April and have now sold more than 60 of our original bucket-reared calves as bulling heifers. Cattle sheds have been cleaned out, with some muck already spread.

The rest is waiting to be spread on the ground ready for green crop and swedes to be planted by the end of June. All mowing fields have now been closed off and grass is growing well. Maize is planted and winter wheat is well forward and out in head.

Lambs are looking well, with the first being sold at the new Monmouthshire Livestock Centre last week for a very respectable £2.80/kg. It is sad to see a supermarket construction site where the historic Abergavenny market stood, but things move on.

Livestock markets are always full of characters and the new one is no exception, with many enjoying their delicious bumper breakfast – thoroughly recommended.

Kate Beavan farms 200ha alongside her husband Jim on one of two family farms near Abergavenny, Monmouthshire. The main enterprises comprise 900 breeding ewes and 50 suckler cows. Meat is sold direct to the family’s traditional butchers shop. Kate and Jim hosted the first series of Lambing Live in 2010