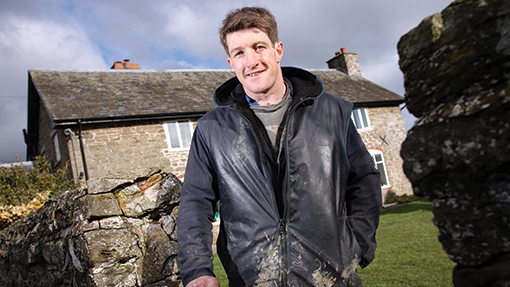 As I write this piece the weather has a more seasonal feel to it, with a slight frost and some much needed rain.

As usual, I have held back from writing until the last minute for a couple of reasons. The first to be able to report on the fantastic night I had at the Farmers Weekly awards, and also to give me time to recover.

As usual, the night did not disappoint and it was great to see so many recognisable faces win. The awards have their critics, but anyone who has been lucky enough to make it through to the final in  each category will know it is a chance to showcase their business. It’s proof that they are both profitable and sustainable, which is something not every business can do.

On a more personal note, my father-in-law Bryan Challenor was recognised for his outstanding contribution to the dairy industry at the dairy show in Telford. It was a very proud moment for the whole family.

The dry weather has suited our autumn-calving cows and with 76 cows calved we have 76 live calves. We were also lucky enough to have two sets of twins to make up for a couple of losses.

I am often questioned on the issue of 100% calving and the simple answer is, it is achievable as long as losses are kept to a minimum and you have a few sets of twins.

My ewes, on the other hand, are proving to be more troublesome. Having had plenty of great advice and feedback, I decided to vaccinate the whole flock against foot rot.  What I didn’t bank on was a ewe rearing up and knocking the needle into the forearm of my new shepherd Dewi.

After a precautionary trip to the local hospital’s A&E department, the result was three days in hospital and a four-inch scar on his arm where the infected area was operated on.

Not only have a got lame sheep, but I am now without a much-needed shepherd for the next couple of weeks – it never said that on the side of the box!