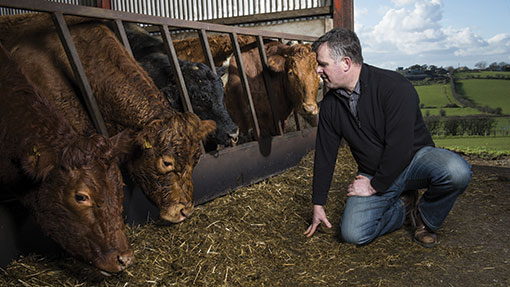 The sun is out, the days are long and the smell of diesel fills the air.

As I write Robert is ploughing and his friend is rolling grass. Calving has gone very well. We calved 120 in the month, same as last year. We still have a few left, but so far we’ve only had three C-sections and one prolapse. The heifers were a dream, AI to Hereford and Angus and all calved themselves – a first on this farm and the way forward for the future.

I organised a livestock crisis meeting last week to air the impending disaster of CAP reform in Northern Ireland, if not properly implemented. There was real show of strength from farmers and about 800 turned up at a village hall with a capacity of 300. However, this showed the assembled government representatives and our political parties that farming in NI must not be played about with or be used as a political football.

See also More from our other livestock farmer focus writers

If we do not get a fair result, not just farmers will lose out, but banks, the grain trade and meat companies, along with all local traders, so this decision must be taken carefully and time is running out.

Grass growth is about to take off. I have most of the cows and calves out in small paddocks and am moving them every other day as ground conditions are still a bit sticky. Talking to a local contractors JD Townley at the weekend, they said they were behind last year’s sowing date and believed a rush of work was about to happen, with maize and spring cereals to sow, as well as silage less than four weeks away. Is it me or does time go quicker as one’s age increases?

Meetings mania has started, with more than five so far this week. Although some can be tedious, many are very important and hopefully I will glean information, as I always say, knowledge is wealth.

Sam Chesney runs a spring-calving herd of 120 Limousin-cross sucklers in Kircubbin, Northern Ireland. He was 2011 Farmers Weekly Beef Farmer of the Year.