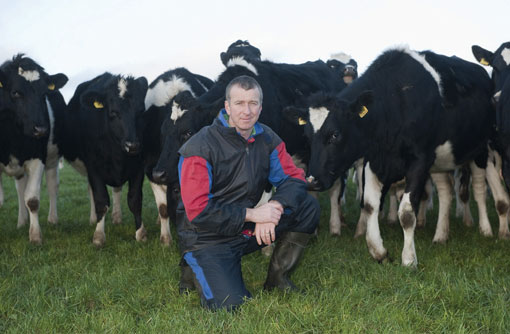 Well done to the BBC and all concerned in producing three fantastic Harvest 2013 programs. Positive, educational and presented with great enthusiasm, a really effective way of informing consumers about how much dedication and effort goes into producing their food.

September saw the completion of my Nuffield adventure with a two-week visit to California, returning more convinced than ever that the global food system is precariously close to the edge of disaster and business as usual really isn’t an option any more. Visiting many of the larger dairy farms in the central valley, it was clear a combination of low market returns and rising costs were still forcing many to leave the industry or diversify – the current trend being almond production.

Dairy systems heavily reliant on purchased feed were at the mercy of high oil prices – corn (maize) being more profitably fed to an ethanol plant than to a cow – leaving those remaining hanging on by their finger tips hoping things will improve.

On a more positive note, strong growth in organic dairy was offering a lifeline for an increasing number of farmers towards the North as a growing number of US consumers look to source sustainable food.

Back at home, both herds will now be on or almost on their last grazing round, where hopefully we’ve arranged another six to eight weeks of quality grazing for them to munch through before the onset of winter. Higher than expected grass growth in August and early September proved difficult to manage, with the temptation to remove more for silage than was sensible. Exceptionally high milk quality from both farms is having a pleasing effect on milk price – an advantage of a solids contract with First Milk. With the addition of some high-quality silage in their diet at some point in October or early November, the girls should easily maintain solids production towards Christmas. Pregnancy results at Dolphenby showed an improvement on 2012, which will happily see us on target to calve 550 for spring 2013. Really looking forward to meeting a few of you at the Farmers Weekly Awards next week; promises to be another great night!