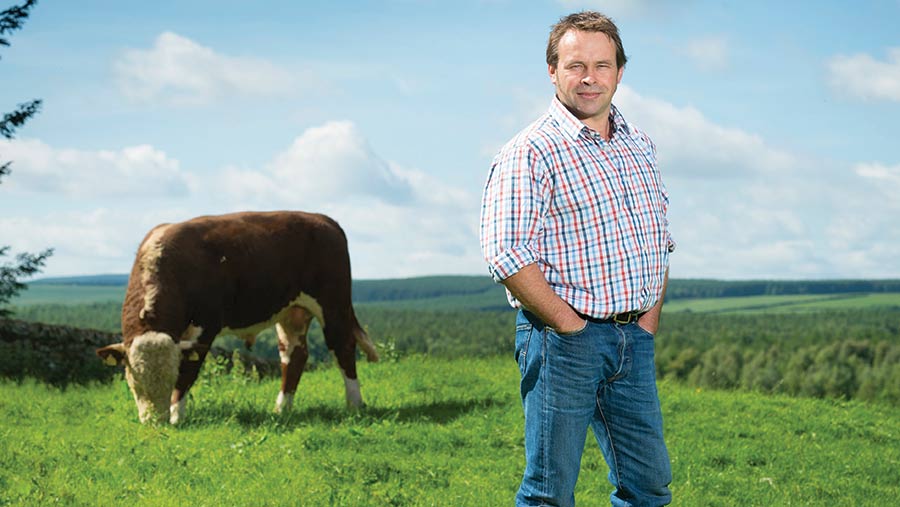 Despite some seeing glorious sunshine with temperatures of 19C, lambing this year has been challenging at times with us sometimes seeing all four seasons in one day.

Snow, wind and below-freezing temperatures hit when we were in full swing, with inevitable losses, especially as we lamb outdoors.

However, our scan was up on last year, and the ewe hoggs scanned at 65%, which has provided extra lambs. Nature often is a leveller.

Calving has gone really well, with more than 65% of cows and more than 90% of heifers calved in the first three weeks.

Yearlings have received their cobalt, selenium, iodine and copper boluses, and the heifers’ pelvises are being measured for selection for bulling in July and calving down as two-year-olds next spring.

Forty-six have the right measurements, have reached more than the minimum weight, and are easy to handle.

These have received a lungworm vaccine.

The rest will be finished. Average weight of heifers at 12 months is 385kg and bullocks 425kg.

The weather has only just allowed us in the first week of May to drill our organic spring oats. Next week we will sow oats and vetch, undersown with red clover and high sugar grasses.

Lime, P and K will hopefully go on this week at variable rates.

My contractor has done a very good job at putting the crops in this year.

An addition was the tracked tractor, which worked the land well while travelling very lightly.

See also: It would be folly to leave the EU

Very soon we will all vote either in or out of Europe.

I have always said I believe we should stay in Europe, and the more I think about our trading position the more convinced it is the right thing to do.

As we finish completing this year’s basic payment application, I know that less regulation would not be on the agenda if we were to leave Europe.

I cannot believe every other European country has an application process as complicated as ours. It is our own government that often overcomplicates the rules, not Europe.

Simon Bainbridge runs a 650ha organic farm in Northumberland alongside his wife Claire and his parents. With 150 suckler cows and 1,500 breeding ewes, healthy maternal livestock and quality feed are priorities