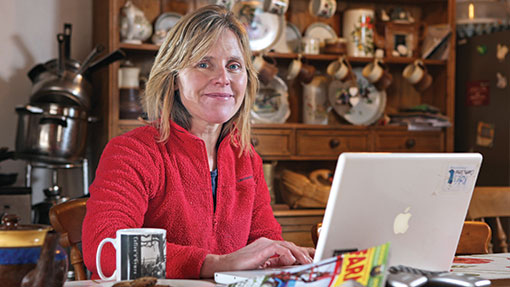 Lambing has now finished for the year and despite a soggy start, went well.

With recent warm temperatures, there is a risk of Nemotodirus, which can be devastating. The first bunch of lambs have been wormed and multi-vitamined and are growing on well. Some are already tipping the scales at 35kg.

We drilled our spring oats last week just in time for the rain, which, dare I say it, was welcomed. According to a local farmer, it will grow well as we had it in before we heard the first cuckoo.

See also More from our other livestock farmer focus writers

For centuries, farmers have relied on lore to foretell the weather. “When swallows fly high, the weather will be dry” makes sense, as when air pressure is low (indicating rain), insects fly low and swallow fly low to eat them. “A cow with its tail to the west, makes weather the best. A cow with its tail to the east, makes weather the least.” Cows graze with the wind behind them and westerly winds tend to bring us good weather, while easterly winds tend to bring us bad weather.

Doesn’t always work though, the first swallow arrived on the farm on 14 April and as we all know, “one swallow does not make a summer”. A few days later his mate appeared and it chucked it down with rain.

Our son spent most of the Easter holidays sat on a tractor, changing the subject rapidly if the word “homework” popped up. Although happy he’s so enthusiastic about farming, I do sometimes wish he’d channel a small percentage of that enthusiasm towards his school work. Our daughter took great pride in taking charge of the incubator and is now the proud owner of eight chicks, with more on the way. As the saying goes: “don’t count your chickens before they’re hatched”, so humidity and temperature are being checked every day.

We finally put the plastic on our polytunnel and thoughts are now turning to what best to grow in there.

The plan is to become even more self sufficient and although Jim assures me “man can live on meat and cider alone”, I think he made that one up.

Kate Beavan farms 200ha alongside her husband Jim on one of two family farms near Abergavenny, Monmouthshire. The main enterprises comprise 900 breeding ewes and 50 suckler cows. Meat is sold direct to the family’s traditional butchers shop. Kate and Jim hosted the first series of Lambing Live in 2010.