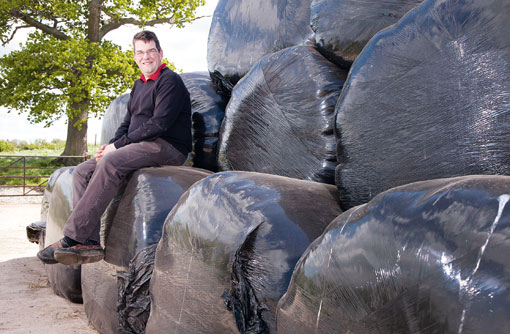 We are flat out in the middle of the county shows at present. We use the shows for marketing our stock and I am delighted that we have also had some luck in winning some championships this year, and I fulfilled a lifelong dream along the way.

Ever since I was five years old I have watched the Burke Trophy being judged at the Royal Show. The Burke Trophy is the ‘Champions League’ of cattle breeding and is something I have dreamt of winning.

A couple of weeks ago at the Royal Bath and West Show one of our cow,s Prona, was selected to represent the Angus breed, along with a bull from Colin Hutchings, and they won. It was a wonderful day for all the family. Dad was in tears and my wife was almost thrown out of the members’ clubhouse for jumping about and cheering too much.

Back at the farm we have got the rest of our silage done. Our lucerne flowered two weeks later than normal and our normal five-year leys were also 10 days behind last year. Yield was OK and we have now had some rain and the regrowth looks promising. We have just put in 10 acres of Westerwold to give us some more bulk for the upcoming winter. I haven’t grown it before and am keen to see the results. We direct drilled it into a piece of lucerne that was into year five and had really struggled this spring, so it will be interesting to see how the field looks in seven weeks time.

Calving is still going OK. We are running at over 80% heifer calves at present, so we must have a pile of bull calves to come. We have introduced some creep feeding much earlier than normal, albeit at low rates, as I am slightly concerned with the condition of the cows after such a bad winter and also the slow growth of grass. It’s easy to get fooled that calves are growing well and then when you wean them you are disappointed with the weights. The early-calving cows are showing good heats and we will start AI on 1 July, ready for calving in early April next year.

Paul Westaway farms in partnership with his wife Kirsty on a 69ha Gloucester County Council farm, running more than 220 Angus and Holstein Cattle. The pair also run an AI business and have recently launched an online steak and wine shop