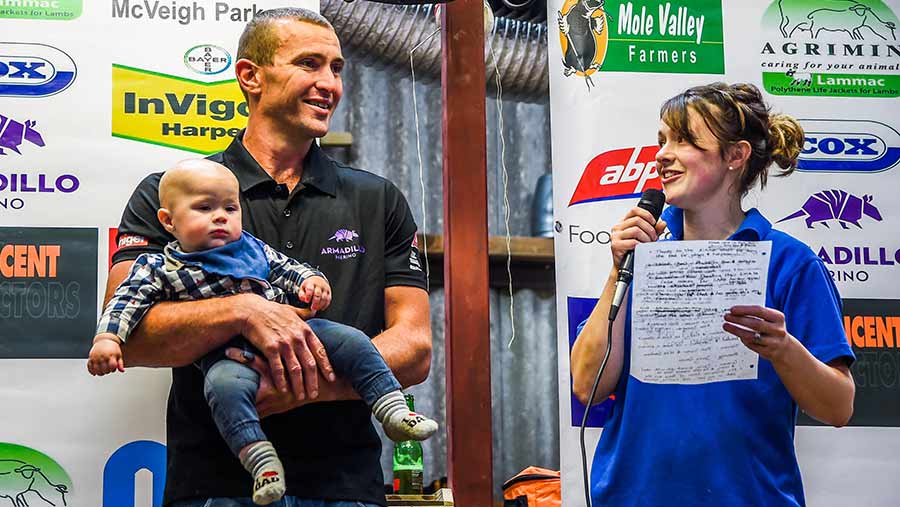 Well that’s over – I have achieved my shearing lifetime goal to break the world nine-hour strong wool ewe record.

This was an amazing team effort from everyone involved – both before and on the day.

I would also like to give a big thank-you to all the good wishes and cards we received before and after – I really appreciated all your support.

I still haven’t worked out how I managed to beat it by 10 sheep – one would have been a miracle.

It was great to have so many supporters come and watch on the day.

We raised money for the local children’s hospice’s Little Harbour Appeal. We are still counting, but it’s looking close to £3,000.

Huge thanks to all our sponsors for their support. It turned out very expensive to make this event happen in the northern hemisphere for the first time, so thanks to the British Wool Board, ABP, McVeigh Parker, Mole Valley, Agrimin, Cox Agri, Bond Timber, Heiniger, Vincent Tractors and Harpers Feed to name a few.

We also had another success the week of my world record.

Ivan Scott from Ireland came to Trefranck and attempted to better the nine-hour lamb world record. I’m happy to say he broke that too by one sheep, shearing 867 lambs. So congratulations to Ivan.

Between the busy record-breaking week, Pip thought it would be a good idea to chuck a christening into the equation.

So on the Saturday, while my family and lots of our friends from overseas were around, we had our son Dusty christened at the local church where we got married.

Now back to farming, taking it easy and most of all, back to being a husband and father.

It definitely has been a huge sacrifice on my family’s part, so I’m looking forward to making it up – maybe even have a holiday (I almost forgot how to spell holiday or even say it).

It’s been great having Dad over to help with everything on the farm while I’ve been away shearing. And it helped having a like-minded Kiwi to bounce ideas off of.