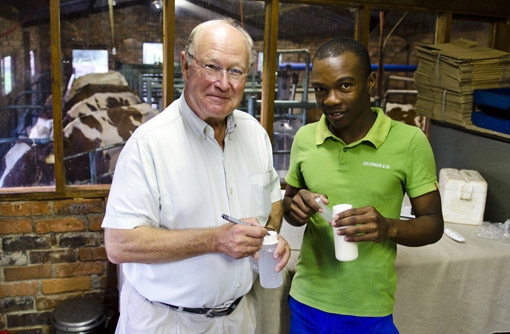 In my experience South African farmers can be a difficult lot, and I suspect that is also true of farmers generally.

They are fiercely independent and individualistic. They want to do their own thing, in their own way, on their own piece of land, without interference.

I suspect this is the reason why voluntary farmers organisations do not attract a high percentage of the type of farmer it purports to represent. Generally between 20% and 30% is regarded as a high percentage.

One of the key reasons for the success of this organisation must be found in the direct and relevant interaction between the executive of the organisation and its members. Some 90 report back meetings are held annually in all the milk producing areas. A monthly magazine for producers, the Dairy Mail, is distributed to its members and a weekly electronic newsletter is sent to members. In these publications and at the meetings, members are apprized of the latest national and international market trends, production figures, the latest technological advances and animal treatments.

The MPO assists farmers to sell their milk in cases where they are left in the lurch by their buyers. It also trains farmers and their workers and provides mentoring services to new entrants to the dairy industry.

The levies received from farmers make up only 20% of the turnover of the MPO; the rest is self-generated mainly by the provision of services and publications to organisations outside the dairy industry .

Agri-Inspect, a subsidiary company of the MPO, has taken the responsibility on itself to protect the internal dairy market from illegal and unauthorised dairy imports. To be effective, it has inspectors at every South African port of entry, without any government assistance. Because dairy products are the most heavily subsidised of all agricultural products, it is quite possible that the internal market could have been severely affected for the local producer, had it not been for the actions of Agri-Inspect.

Perhaps I should amend my initial statement that farmers are generally an obstinate and independent lot, by conceding that when the chips are down they tend to stand together.

For more articles from Danie Schutte