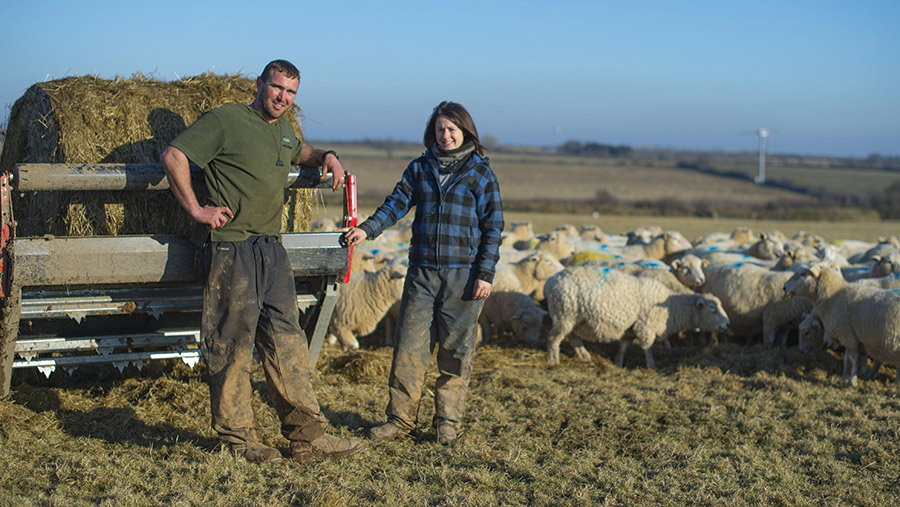 My wife Pip reminded me this article comes out Valentine’s Day weekend… I think that was a hint. Lucky for me, this year the garden is full of daffodils after such a bizarre season.

We scanned our sheep two days after arriving home from New Zealand, which was a breeze thanks to a good set up and the help of good friends and my father-in-law.

My mother in law – Super Nan as she refers to herself – looked after our four-month-old son, Dusty, as we thought it would be a bit of a shock to the system for him coming from the New Zealand summer to the British winter.

We were really pleased with how our two-tooths and half-breds scanned, but a little disappointed with our mixed-age ewes as they were down 26% from last year for no apparent reason.

Our ewe lambs were 95% which is ideal, as the majority of them are carrying singles.

We were really pleased with how all the sheep were handling condition-wise and how their feet are holding up seen as it has been so wet and they have been grazing root crops.

It was disappointing on returning to weigh up our store lambs down on grass keep.They just haven’t grown as we wished.

We managed to send 25%, but now we’ve decided to going to finish the rest of them in the shed on silage and feed.

This is not how we planned to finish them but as the winter is going on they are just sulking and not finishing. It is what it is.

Dusty has had jet lag since our return – he’s been wide awake from 2am thinking it’s day time.

This makes for a long day, as I have been travelling up to Salisbury shearing most days to help cover for a friend who is shearing over in New Zealand.

It has been really busy shearing and crutching for people who house all their ewes for lambing. Being able to shear so early in the year is also great preparation for the record attempt.

The good news is that given the time of the year things should only get better. The days are getting longer and it can’t rain for ever… can it?