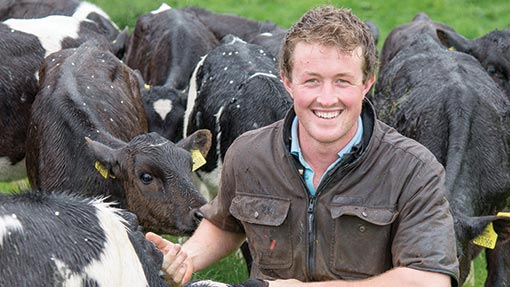 It is fantastic publicity for a low-cost, pasture-based system, and their success also shows what can be achieved in a carefully considered joint venture. It is testament to the work of everyone “down the road”. They continue to set the benchmark, giving our little hill farm something to chase!

The awards night was also a great opportunity to catch up with this year’s Farmers Apprentice crew. I am looking forward to seeing what they got up as the series is released online over the next few weeks.

Last month’s pregnancy testing went a lot better than expected, with 72% of cows in-calf in the first six weeks and 9% empty after 12 weeks of mating. While not record breaking, this is a big improvement on previous years.

It also bodes well for next year’s breeding, with increased numbers of early calving cows hopefully standing a better chance of getting pregnant again for 2016.

Credit to the guys who had the cows in great condition for the start of breeding this year, giving them the best possible chance of regular oestrus and conception.

I was once told that “farming is simple – if you’re not sure about something you just need to have a look” (perhaps heeding the odd health and safety precaution on the way). With this advice ringing in my ears, we did regular paddock checks of the cows through mating to find the bulling group. Helped by some tail paint, it was relatively easy to pick out cows that were on heat, and appears to have made a big difference to overall reproductive performance.

We are also very fortunate to have an experienced pair of Kiwi AI technicians who were fully prepared to come back in the afternoon to serve the odd cow that dodged the drafting gate that morning.

And who’d of thought it, a (wannabe) dairy farmer managing to write a whole article without mentioning the milk price.

George Brown won the Farmers Weekly Apprentice in 2012. After a stint working on dairy farms in New Zealand he has returned to the UK and is now managing the 330-cow dairy herd at Cairnhead Farm on behalf of Robert Craig