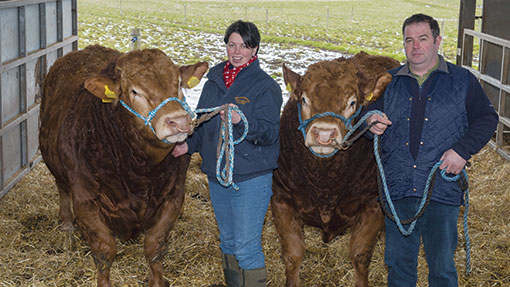 March has arrived and the ploughs have slowly been entering back on to fields and the bean seed is patiently waiting some drier days.

The new fertiliser spreader with weigh cells is here, along with a few hours of tuition from the rep. The boys should have been around for backup that day as we fear the rep will be on speed dial when we finally decide to tackle the tram lines.

We had 10% of the Limousin bulls forward for the Stirling sale last month and nine sold to an average of £5,385. Trade was getting sticky towards the end, but as always good bulls sold well.


The chat around the pens wasn’t so bright and a few buyers were a bit undecided regarding the future of their suckler cows. In the show ring we gained reserve junior champion, but it’s the sale ring that pays the bills and Newhouse Hartley, our July-born bull made 12,000gns. He had the highest EBV in the catalogue and weighed in at 1,065kgs. He was probably one of the best bulls we have bred.

We have since bought a half share back in Hartley, as we couldn’t see any suitable bulls at the other spring sales. We also went shopping during the Charolais week and bought a third share in the top-priced bull Meardy Hearthrob. He has a great body and excellent pedigree to match. Both bulls are home and in with the cows.

Hill scanning went well with the cheviots scanning 149%, which was the same as last year but the blackfaces were up to 159%. Our small flock of Blue Faced Leicesters and Texels are at the drop and full of lambs with 10 sets of triplets and two sets of twins on board.

We have continued to sell lambs deadweight and they have graded well, with pure Blackfaces reaching £91. But Woodhead Brothers cut numbers this week and news is filtering through that New Zealand lamb is to hit English supermarkets with only Scotch lamb sold in stores north of the border. Bad news for any sheep farmer heading into lambing.