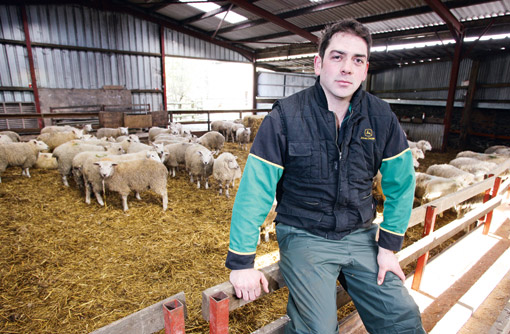 The shearing season has been under way for just over a month now and with the weather on our side it allowed us to make good progress. With an increased number this year hopefully we should be finished within the next three weeks. Ewe condition has been surprisingly good; expectations were low after last winter. One of the main talking points during the season has been the weight of many of the lowland ewes, with many flocks containing a large percentage of ewes tipping the scales at 90kg and over. Apart from being a shearer’s worst nightmare, there are many other downsides to having overweight sheep. Many farmers seem oblivious to the fact these large ewes do not wean any more kilos of lamb than a ewe a third of its size, despite needing much more upkeep than a lighter ewe. Problems with feet are also a major factor with these ewes. With so much weight being carried on a such a small area, especially during late pregnancy, this can be a recipe for disaster at a crucial time, as well as increasing labour costs and drug use. The early season comments to some customers looking at keeping lighter sheep is that big is not always better. Hopefully this will provoke some thought.

Sheep shearing, while not appealing to everyone, has a very good earning potential for a relatively low outlay. Depending on ability, the outlay can be recouped in a matter of weeks. And with courses readily available during the summer months it’s easy to perfect your skills.

The sheep industry is one of the best ways for a new entrant to begin their career in agriculture, with many opportunities often overlooked. Poor-quality land, or even arable land that requires a break from cropping, can provide opportunities for a new entrant. The latter provides an ideal situation for any sheep farmer to access clean ground, which is priceless for any producer, while still providing the arable farmer with a rent for his land and help clearing problems such as blackgrass. Working together could provide solutions for both parties, which could increase efficiency and profitability no end.

Tom Jones lives on a 110ha upland beef and sheep farm near Lake Vyrnwy, Montgomeryshire. He also has a contract shepherding business looking after ewes locally