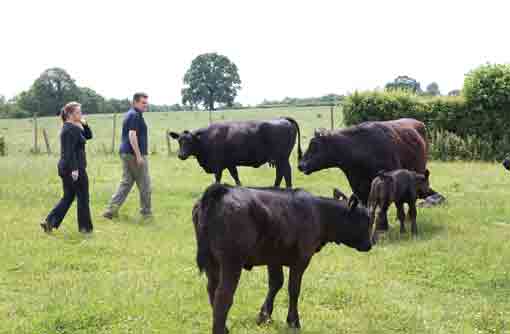 May is one of my favourite months; the cows look great and everything springs to life. It’s also the start of the show season and we have lots of farm walks.

While the weather has improved slightly I would say our normal grass and Lucerne are around two weeks behind previous years and won’t get cut until early June.

However, we did cut a very nice crop of Italian Rye Grass/Red Clover and made some really good silage. Our Maize is also up and looks well, but really needs some heat to make it fly away.

We are lucky again this year that Beef Expo is once again being held in Malvern, which brings lots of visitors to our farm. We have groups from several different countries coming to see Angus bulls and cows including a team of young Canadian beef farmers who will be competing at Expo in the “Young Show Stars” competition. They are borrowing some heifers from here, as are two teams of young UK Angus breeders. I hope the heifers behave!

Our show team is primed and ready to go. We are showing at the Bath and West, Royal Cornwall and Royal Three Counties. We use the shows to market our genetics and in particular our young bulls, and hopefully win the odd prize. While showing can be accused of lacking a little commercial reality, we find it a great vehicle for meeting customers both current and new. The kids also have some nice calves to show in various classes.

We are going to put cubicles back in this summer and will house all the spring calving cows and heifers in them from now on.

Paul Westaway farms in partnership with his wife Kirsty on a 69ha Gloucester County Farm, running more than 220 Angus and Holstein Cattle. The pair also run an AI business and have recently launched an online steak and wine shop