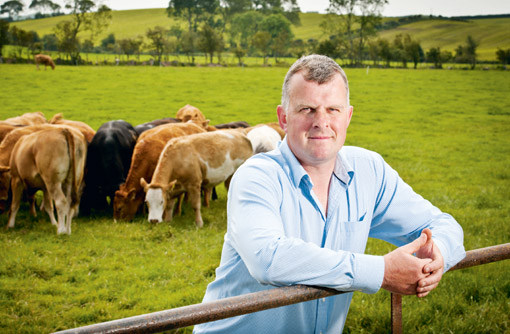 As I write, fellow focus writer Thomas Steele is tedding my grass after getting a heavy shower of rain last night. Despite it being two weeks later than last year, the quality is good and quantity is not too bad.

We baled 10 acres of strong grazing last week in perfect conditions. This is in stark contrast to the rest of Northern Ireland, where severe hardship, waterlogged pasture, and no local fodder available has forced the NI executive to issue a hardship fund to help pay haulage on fodder deliveries.

Attending a UFU (Ulsters Farmers Union) meeting last week I felt a bit embarrassed when I was asked if I had any cattle out yet. That was on 20 May and we were baling silage.

The new Balmoral Show is now established as a true success and will become, I believe, one of greatest shows in this country.

It reminded me a bit of the Royal at the entrance and a bit like the Highland in the cattle lines and had all the bustle of the Royal Welsh. Well done to the RUAS society once again. Agriculture has taken a lead in Northern Ireland’s future where others feared to tread.

I was talking to a local gentleman farmer recently, who told me he had recently been in Seville and went to see a bull fight.

He was in awe at the spectacle and at how professional the bull fighters were and how much these men put their lives in danger.

Many in the UK will say this is cruel and barbaric, however this has been going as part of life for centuries.

A vast proportion of our population actually think animals “speak” and are living as equals, whereas the majority of the world know animals are largely for food. This is one of the reasons why it’s so hard to get a badger cull to operate, despite costing the taxpayer approx £100m to compensate for slaughtering food-producing animals with names like Daisy and Bluebell. Would this not be better spent on schools or hospitals?

Summer is round the corner and let’s hope we can relax a little. As farmers we always tend to look on the bright side of life.

Sam Chesney runs a spring-calving herd of 120 Limousin cross sucklers in Kircubbin, Northern Ireland. He was 2011 Farmers Weekly Beef Farmer of the Year