A couple of weeks ago I went to do my early morning check of some straw-based yards that we finish pigs in and found a pool of blood in front of one of the gates with a blood trail over the top of the gate.

This is the second time in six months that we have found this at this particular yard.

Clearly, at least two people have climbed over the gate into the yard, killed a pig, then lifted the carcass over the gate and allowed it to bleed before putting it into their vehicle.

We have security and alarm systems all around the breeding unit to prevent unauthorised visitors and to alert us to any system failures, but we have never deemed it necessary to have these around our finishing yards – clearly we are going to need a rethink. 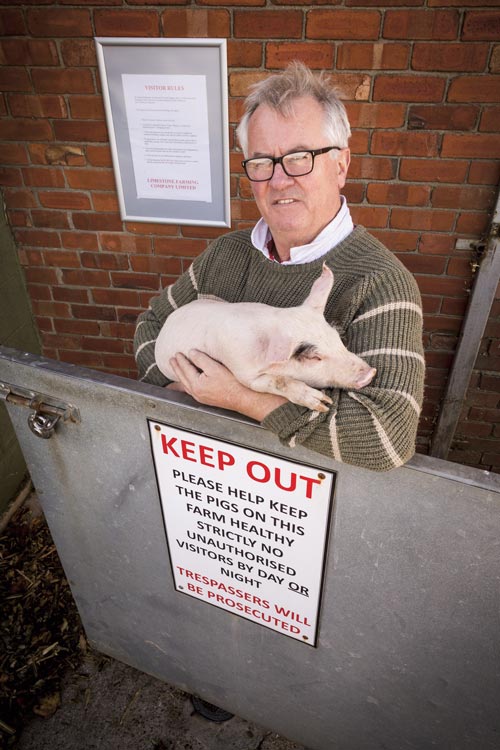 The police were informed and have given us a crime number but have not been out to us.

As usual, I had a few sleepless nights thinking about what we can do to prevent this happening again and my recurring thought was most rural crime happens at night, so why don’t police forces get proactive and have patrols at night?

Stopping and searching vehicles at this time would surely be far better than trying to solve crime and wasting police man hours form filling.

Pig producers world-wide are waiting for, and, in some places, enjoying, the rise in pig prices because of China’s misfortune with African Swine Fever (ASF).

Hopefully there are going to be a couple of really good years to come, but if China/Asia do get ASF under control their pig industries will come back stronger than ever.

They will get rid of the backyard farmers whose poor biosecurity and swill feeding have led to the rapid spread of ASF, and will replace them with large units with strict biosecurity and improved genetics.

If their renaissance coincides with a rapid increase in sow numbers in other countries, the next big downturn in prices could be two to three years away.