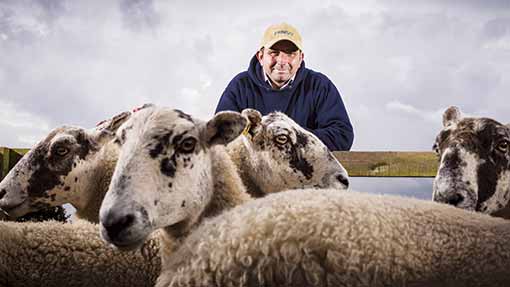 We have not started lambing yet. I think the ewes are hanging on for dear life – normally we would have had a few sets before time. A couple of ewes have prolapsed. I wish I knew the answer to why ewes prolapse. Some people say it’s genetic, others food ration or maybe it’s just old sheep.

I would like to think the ewes have held off lambing because they can see the tractors flying in and out of the yard and they know we are flat-out spring drilling. The past couple of weeks have seen every farmer and his dog ringing up to have their beans drilled.

The lads on the farm have nicknamed Luke, the new apprentice, “Lowcost”. I soon amended this to Locust, as he was a plague the other day when he didn’t engage his power harrow in the ground while travelling down the field. He was too busy fiddling with the guidance system on the tractor and broke the cardinal rule of tractor driving – always look behind. Seriously, he is turning out to be a fantastic asset to the farm.

I have not been to a trial for a few weeks, but my young dog Tom (sire Aled Owens Mac) won the last nursery trial of the season and will now progress to open trials. I will be trying to get him qualified for the National Sheepdog Trials, but this will not be an easy task. Getting Tom to qualify will be more like trying to qualify a Grand National horse for the Olympic dressage final.

I went to Skipton Dog Sale the other week to meet Kevin Evans and David Wood and pick my new pups up, as it was the halfway point and is always a good social gathering for the sheepdog industry.

We have called Kevin’s pup (the good-looking one, for obvious reasons) Jim. But my good mate David had given the national champion Ricky Hutchinson the pick of the litter and had already picked the ugliest one for me. It has more black dimples on its nose than our new apprentice (that’s mates for you). We have named this one Sidney (Sid) after one of my all-time heroes Sid James.

James Read farms in partnership with his father, in Louth, Lincolnshire. They farm 400ha of mainly arable land, run 200 breeding sheep and a pack of working/trialling sheepdogs.