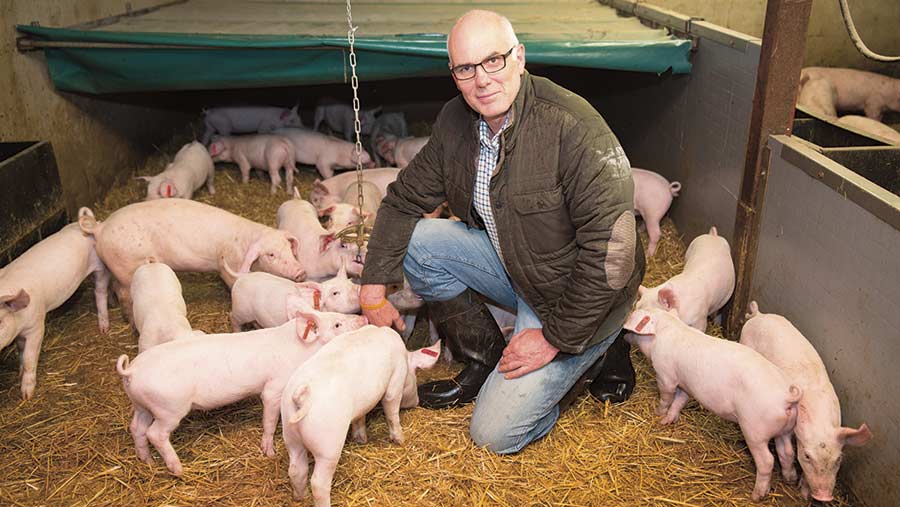 The recent hot, humid weather has made life uncomfortable for both stock and staff alike.

Fortunately the pig slowly adapts to most circumstances and the issues relating to the heat such as reduced appetite, reluctance to come into heat and lack of interest in suckling piglets are now easing.

The upside to the hot weather has been a reduction in the amount of heat required in the farrowing pen. I look forward to the reduced electricity account. As there are 200 175W heat lamps running 24 hours a day at 11p/hour, it soon adds up.

The level of straw required has also fallen sharply, enabling us to let a local producer have some of the surplus. With current use and stock levels, we should last until late August or early September before starting on this season’s straw.

In praise of staff

With staff numbers reduced because of illness, the increased workload has to be met and stock routines maintained to adhere to welfare standards. At such times I have to thank all present for their efforts and commitment to the business.

These events have made us realise and appreciate the staff we have and how much trouble we would be in without them.

The herd performance continues improving. We recently achieved born alive figures close to our best, which was reached when the herd was a lot younger and healthier.

Pre-weaning mortality has continued to fall and, set against the increase in births, the next figure to see some major upwards trend will be the number of piglets weaned – happy days.

Herd records show the main reasons for the improvements appear to relate to us no longer inducing farrowing, leaving piglets much longer with their own mum to obtain colostrum, the introduction of service stalls, much tighter control of feed levels during pregnancy and my main area of interest – herd health and its control.

As a rugby fan I have to say that the Lions tour has been edge-of-the-seat stuff and the way they responded to the first game was a credit to the whole team. I would never have expected the final result to be a well-deserved drawn series.

Tony Bayles runs a herd of 1,000 sows producing 7kg pigs and all his own replacement stock on contract to a large local producer.