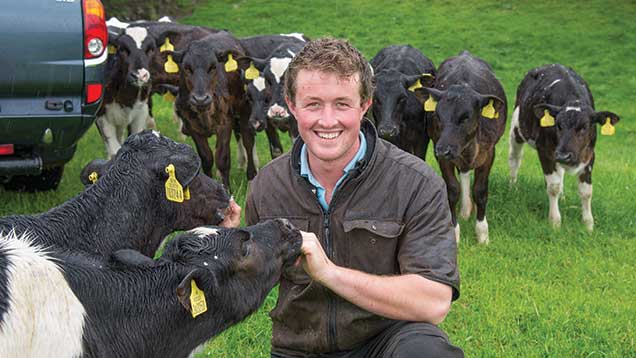 It was recently suggested to me that being too upbeat in these columns was going to vastly inflate the local land market, with foreign capital about to flood into the area, as investors seek to purchase all this prime agricultural land that must be along our fell side. So, in a bid to allay any fears, this piece will have to take a gloomier outlook.

So lets start by making clear that March was grim. Cold, wet and bleak, with soil temperatures remaining low and grass consequently growing practically nothing. Heavy rain meant the cows poached the odd gateway and on multiple occasions the snow could be seen creeping down the fell. I frequently couldn’t find enough hats to allay a brain freeze on the quad bike, only made worse by perpetual showers as I aquaplaned around the swampier parts of the farm.

There we are. Land market, corrected.

Fortunately, things are picking up, with more grass grown in the first week of April than the whole of the previous month. Soil temperatures are creeping towards double digits too – just in time, as we near the back of the silage pit.

With more than 100 heifer calves on the ground we look to have plenty of replacements in the pipeline, and are in the process of finishing a race that will make it possible for us to run them over a newly purchased set of scales. This should give us more control and the opportunity to manage their growth rates, hopefully improving their reproductive performance and enabling greater selection pressure to be placed on the herd.

See more: How to get the most from sexed semen

Six weeks into calving, and the focus can firmly switch towards breeding, with all milking cows now tail-painted for observation of pre-mating heats. Animals found to be anoestrus one week prior to the start of AI will be synchronised for service in the first week of mating, giving them every chance of being an early-calving cow next year.

This year we have taken a more proactive approach to tackling cows with endometritis, metrichecking them in groups, 20-40 days post calving. To date, we have treated 6% of animals, predominantly heifers, who had assisted calvings.

Finally I must say a big thanks to the work experience students we had with us at various points during calving. They have all been a great help, and it has been thoroughly enjoyable working alongside them. So thank you, I cannot say that enough.

George won the Farmers Weekly Apprentice in 2012. After a stint working on dairy farms in New Zealand he has returned to the UK and is now managing the 330-cow dairy herd at Cairnhead Farm on behalf of Robert Craig.