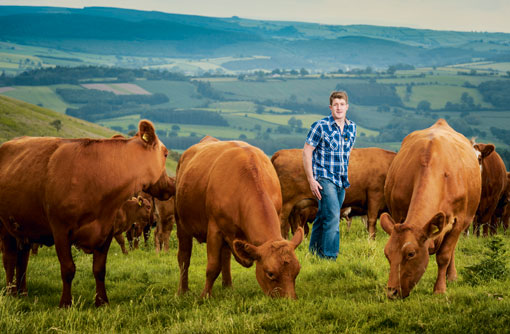 This month has been a complete mixture of emotions, from the highs of selling large numbers of breeding stock to the low of having a bull and two cows test inconclusive for the second time.

I’m starting to realise that farming life usually balances itself out, so when positive things happen enjoy, and when faced with the negatives try not to dwell on them too much.

I have recently returned from the Beef Expo in Malvern and was quite pleased with the general optimism within the industry. On the Stabiliser Cattle stand we had a huge amount of interest in both breeding females and breeding bulls. I’ve got a feeling that profit and performance matters more now than ever.

I ended up taking nine cattle for the stand, which seemed to create quite a stir, especially my two-year-old bull Mustang, which had served 80 cows before he was two.

David Heath also attended the show and reiterated the fact that our industry should not be reliant on subsidies and coupled payments should be a thing of the past, which is all very well but if our Welsh, Scottish and Irish counterparts have a different system surely this will make us hugely disadvantaged.

The local news team paid me a visit on the Monday and again on the Thursday. I was well aware it was all to be made into one programme and was conscious of wearing the same clothing until one of the cows got a bit excited and messed all over my jacket. I guess they don’t have such problems in Hollywood!