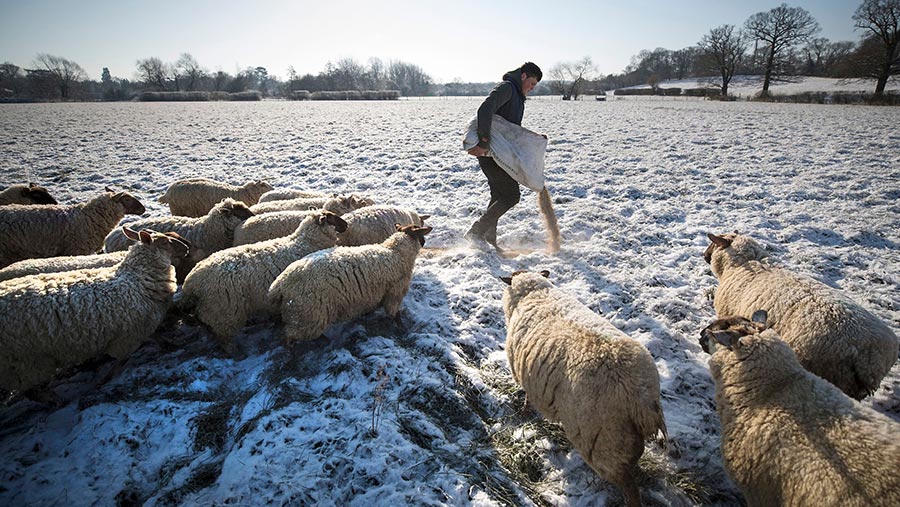 The “Beast from the East” is wreaking havoc on livestock farms across Britain.

Farmers have been battling the elements as strong winds and snow battered the country, causing huge snow drifts.

In south Wales, up to 51cm of snow has been recorded as Storm Emma hammered Britain, while 40cm has fallen in areas of Scotland and northern England.

Here are a few of the tweets that capture what’s happening on farms. And here at FW, we never cease to be amazed at the dedication of a livestock farmer.

Many livestock owners have had to herd sheep and cattle to the safety of sheds.

Meanwhile, dairy farmers have spent painstaking hours covering and heating parlours and cluster units in an attempt to stop them freezing.

Farmers from Scotland and the north of England and Wales seem worst affected, with farmers posting pictures of themselves digging through huge snow drifts to get to stock and put out feed.

Look at what I’ve to get through to get to feed my pigs? Look at height of snow to farm gate? @TV3Ireland @brid_h2g @BoyneValleyFood pic.twitter.com/gpizrEOSSh

So the road and main access route through the farm is about 5-6m under the drifts, busy day digging alternative routes/gateways out to get food to animals and can’t even find silage feeders in some fields. At least there’s no need to shift electric fencing #BeastFromTheEast pic.twitter.com/n6MWMKghgM

Farmers are deploying all tactics to keep stock as protected as possible from the horrible conditions outside.

Keeping our new lambs and their mums out of the wind and snow in our slightly modified @BritcoverUK field shelter. #Lambing18 #StormEmma #farming #happydays pic.twitter.com/7Vy3aBVAfr

However, some farmers haven’t been able to shelter animals, even indoors.

Ok Emma if you wouldn’t mind changing direction please it would be appreciated!!! pic.twitter.com/G4jvZj5JBi

It’s a stressful time for many.

I’ve been so worried about the 50 ewes with lambs that are outside (no space to bring them in) and have been checking them night and day, but the ewes have kept them tucked under the hedge and they are doing ok. #Lambing18 #beastfromtheeast #farm24/7 pic.twitter.com/pmTcohaP3u

The abysmal conditions have made even simple day-to-day tasks impossible, with farmers being forced to cart fresh water to stock due to frozen pipes.

In some parts, treacherous road conditions have meant milk tankers have been unable to pick up milk.

Others have not been so lucky and have faced the gut-wrenching task of disposing of tank-fulls of the white stuff.

No milk tanker today! Having spent a day thawing, milking, feeding, pulling out vehicles and bedding livestock the last job before evening milking is pouring all the day’s milk into a bucket so it can be tipped into the slurry and disposed of. Who would be a farmer! pic.twitter.com/bRg81MRlRR

But some of them are even still smiling!

As Elle says, shoutout to all the farmers battling the elements…

Shoutout to all the farmers still out working! #farm #snow #TheBeastFromTheEast pic.twitter.com/JnoesgM1l4