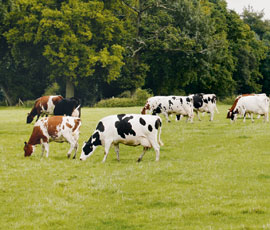 Livestock farmers are being warned against the illegal practice of using poultry litter as bedding material, as the winter housing season approaches.

The use of poultry or broiler litter can lead to outbreaks of botulism in bedded livestock – mostly cattle.

In recent years, some farms have suffered repeated outbreaks of botulism as a result of direct access to litter from broiler houses.

The Animal Health and Veterinary Laboratories Agency (AHVLA) has always advised against the use of poultry litter as bedding material because of the risk of botulism, a disease which can cause muscle weakness, paralysis and death in cattle.

Botulism outbreaks in sheep and goats are much less common than in cattle. Although the disease is occasionally identified in people, the risk to humans is considered very low.

Robert Hogg, an AHVLA veterinary investigation officer, said: “We continue to see cases of botulism in cattle and sheep exposed to broiler litter, mainly while at pasture.

“That is why we advise against the use of litter on any grassland, as there is concern that the litter may contain botulinum toxin which is known to remain potent for long periods.”

It is illegal to use poultry litter as bedding because of the risk of botulism under the Animal By-Products (Enforcement) (England) Regulations 2011 – and similar legislation in Scotland and Wales.

Under these regulations, poultry litter is treated as manure, defined as a Category 2 animal by-product with prescribed permitted uses and disposal routes.

Farmers who use poultry litter as bedding for other stock also risk committing an offence under the Animal Welfare Act if animals suffer unnecessarily or are caused harm as a direct consequence of such action.

Mr Hogg added: “Animals have become affected through direct access to litter when it has been heaped or spread in the field where they are grazing, and indirectly from litter in neighbouring fields, possibly as the result of movement of material in the litter by scavenging birds and animals.

“Animals fed silage made from fields fertilised with broiler litter are also known to have succumbed to disease. We therefore recommend livestock are kept away from litter waiting to be spread, that litter is applied only to arable land, and that it is ploughed in immediately.”

Add your views to our botulism forum